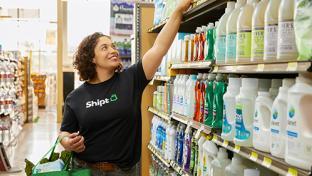 Shipt is doubling its investment in holiday bonuses to reward its community of workers, known as "shoppers."

Shipt will give its workers -- known as "shoppers" -- holiday bonuses.

The same-day delivery service, which said that it has at least 200,000 delivery providers, will offer bonuses ranging from $50 to $300, with exact amounts varying by market, but always scaling based on the number of shops completed in the time frame.

Given the complexities and challenges of this year, Shipt is doubling its investment in shopper holiday bonuses to reward the shopper community while ensuring customers and retail partners have a successful Thanksgiving week. During Nov. 25-30, a time when many households are expected to shop online for the holidays, all shoppers nationwide will be eligible for the cash bonus.

"Shipt Shoppers are working incredibly hard, and we want to make sure they know we appreciate them and all that they do," said Shipt CEO Kelly Caruso.  "This holiday shopping season will be a very busy one – and we're proud to reward the shoppers who are going above and beyond to serve their communities."

Shipt shoppers will be able to view the specific bonus available in their metro area and track their progress within the shopper app.

Birmingham, Alabama-based Shipt continues to grow and use new ways to attract consumers as the holidays approach — and as the pandemic rages. For instance, earlier in November, the same-day delivery service said that through Dec. 15, anyone who pays for a pack of Shipt Passes with their Mastercard will receive an extra pass free.

Earlier this year, Shipt began offering customers the ability to pay per order by purchasing Shipt Passes, allowing more flexibility than the annual membership plan and the opportunity to save up to 20% when purchasing multiple passes in a pack.  During this limited time, customers who purchase a pack of three or five Shipt Passes using their Mastercard will also get an extra Shipt Pass for a free delivery.