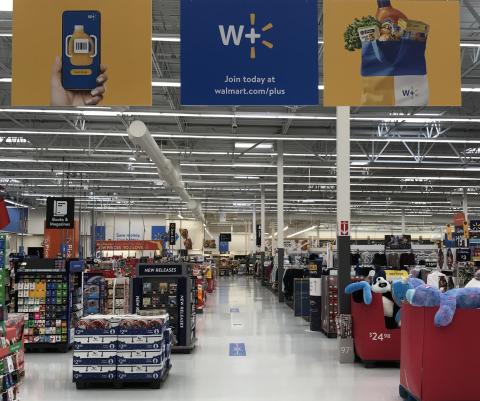 Sparsely populated stores were a common sight during the Thanksgiving weekend as retailers curtailed promotions to limit crowds.

Online sales are expected to set a new record today and top $10 billion following dramatic declines in traffic at physical stores over the weekend that reflect a very different trajectory for the 2020 holiday season.

Traffic to physical stores on Thanksgiving Day declined 94.9% as many retailers opted to close that day while Black Friday stores traffic declined 52.1%, according to the Sensormatic Solutions division of Johnson Controls.

“Due to COVID-19 and social distancing requirements, shoppers were more purposeful in their in-person Black Friday shopping, causing significantly less crowds than we’ve seen in the past,” said Brian Field, senior director of global retail consulting, Sensormatic Solutions. “This was compounded by retailers not offering as many in-store doorbusters and the increasing adoption of e-commerce.”

While many retailers limited their Black Friday hours compared to non-pandemic years, the peak time for shopping remained the same, with the busiest influx of traffic occurring around 2 p.m.

Field said store traffic should rebound some in the weeks ahead as shipping deadlines approach and shoppers look to make last minute purchases.

That assumes they will have last minute purchases to make after online sales set new records Thanksgiving weekend. According to Adobe Analytics data, Black Friday hit a new record with consumers spending $9 billion, an increase of 21.6% from the prior year and second only to Cyber Monday 2019. Adobe expects Cyber Monday 2020 to become the largest online sales day in history, with spending between $10.8 billion and $12.75 billion, representing a growth rate between 15% and 35%.

Stores played a key role in the digital fulfillment process, with in-store and curbside pickup increasing 52% on Black Friday, according to Adobe.

“We are seeing strong growth as consumers continue to move shopping from offline to online this year. New consoles, phones, smart devices and TVs that are traditional Black Friday purchases are sharing online shopping cart space this year with unorthodox Black Friday purchases such as groceries, clothes and alcohol, that would previously have been purchased in-store,” said Taylor Schreiner, Director, Adobe Digital Insights.

An even higher rate of digital growth was reported by Salesforce which said that digital revenue on Black Friday increased 23% to $12.8 billion.

We’ve also included quotes below that you can use in your stories from Rob Garf, the VP of Strategy and Insights at Salesforce.

“With expected shipping surcharges, caps and capacity issues, retailers have been making every attempt to pull forward demand by creating urgency and product scarcity to encourage consumers to buy early in the season,” said Rob Garf, vice president of strategy and insights with Salesforce. “That didn’t diminish, though, digital traffic and sales on Black Friday — with 30% growth year-over-year globally. Retailers that haven’t been planning for ‘shipageddon’ will be in a tough position as they scramble to fulfill the onslaught of digital orders before the winter holidays.”

Salesforce added that curbside capabilities helped retailers win amidst shipping constraints. Retailers in the U.S. that offered curbside, drive-through and in-store pickup increased digital sales by 19% compared to those that don’t offer these options on Black Friday, according to Salesforce.

Yet more evidence of the surging popularity of online shopping over the weekend was provided by global commerce company Shopify. It said Black Friday sales from the more than one million independent and direct to consumer brands on its platform increased 75% to $2.4 billion globally.

“In just a single day, merchants around the world produced more than 80% of the sales of the entire holiday shopping weekend last year,” said Harley Finkelstein, President of Shopify. “With more consumers than ever shopping online this year, we anticipate this weekend being one of the biggest ecommerce events in history, as consumers vote with their wallets and support the independent and direct-to-consumer businesses they love.”