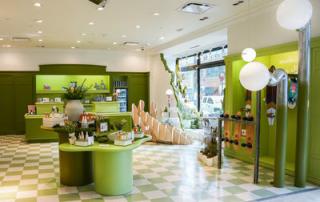 Showfields in December opened its latest store, a location in Washington, D.C., bringing its total number of stores to four since it was founded in 2019.

According to a Dec. 8 release, Showfields’ new location — its second store to be called “House of Showfields” — opened in the Georgetown neighborhood of Washington. Showfields is a department store that dubs itself “the most interesting store in the world” and features an experiential store design and immersive rotating experiences from various brands.

The new Georgetown location was built with sustainability at the forefront, according to the release. The store space on Georgetown’s M Street was previously home to a Brooks Brothers store, which has been reimagined by Showfields’ internal design team to retain the “soul” of the original design.

"This store is a great example of how we approach the future of retail — we can take a heritage retail space, re-work it, and create an entirely new environment that's wholly unique but at its core nostalgic for a classic shopping experience,” said Showfields co-founder and CEO Tal Zvi Nathanel, in the release. “We re-used a lot of the existing infrastructure of the previous store — for us it was important to re-utilize and re-work as much as possible while introducing D.C. to our signature aesthetic.”

The December opening followed the retailer’s opening of a store in the Williamsburg neighborhood of Brooklyn, New York, in November. Both stores feature Showfields' latest concept — House of Showfields — that organizes the space into departments that represent different rooms in a house.

The ground floor of the three-story House of Showfields store will at launch feature a curation of Black-owned brands, according to the release. These brands include hair care products from EDEN BodyWorks and Richualist, self-care products from Mary Louise Cosmetics, AbsoluteJOI and Hanahana, beauty products from LipLoveLine and jewelry from MadeByKwest.

Other brands featured at House of Showfields in Washington are KonMari by Marie Kondo, MERSI and Jane Win.

Like other Showfields locations, which include its original store in the NoHo neighborhood of New York City and a store in Miami, the new Washington store will host weekly events.