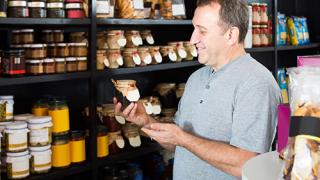 More malls could open in the coming few days

The largest mall operator in the U.S. wants to get back to business – and get there quickly.

Indiana-based Simon Property Group has distributed plans to reopen 49 shopping centers starting Friday, according to the New York Times. Those malls are located in 10 states, and would resume operations with pandemic protection measures that include having ample space between seats in food courts, keeping play areas and drinking fountains shut down. “In restrooms, every other sink and urinal will be taped off,” the report said. “Regular audio announcements will be made to remind shoppers of their part in maintaining a safe environment for everyone.”

The rise of e-commerce and other factors meant that malls were having a tough time well before the pandemic started. To bring new life to those sprawling properties, some mall owners have recently floated ideas about putting in food kitchens for delivery services, entertainment complexes and other features. But store closures and job losses brought about by the ongoing COVID-19 outbreak have deal another major blow to malls, and it’s not clear just yet if Simon’s reopening plan will bring about significant revenue gains or otherwise work to stop the descent of mall retail.

“The success of such an approach depends largely on whether retailers will also decide to quickly reopen stores and whether the public will feel comfortable going to malls when tests for the virus remain difficult to get,” said the newspaper report. As far as consumer attitudes go, there emerged fresh evidence on Wednesday that most shoppers are not yet ready to return to physical stores. Only 34% of U.S. consumers feel safe enough to shop inside stores now, according to the new “Deloitte Global State of the Consumer Tracker” survey report. Deloitte drew its findings via surveys of 1,000 U.S. consumers.

Simon Property owns or has an interest in some 233 properties. Earlier this year it announced a deal with Taubman Centers in which Simon acquired an 80% interest in The Taubman Realty Group (TRG) for $52.50 a share with the Taubman family retaining a 20% interest – a deal that created the nation’s largest retail landlord. Taubman operates 26 regional U.S. shopping centers. At the end of 2019, Simon occupancy rates at its properties stood at 95.1%, with retailer sales per square foot at