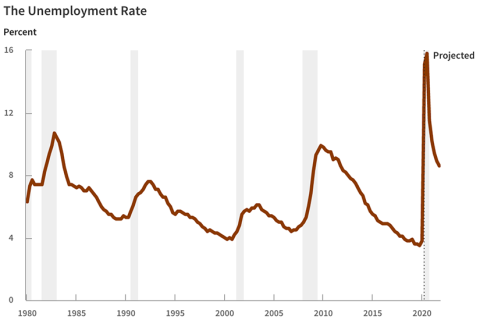 With the Congressional Budget Office projecting unemployment to surpass 16% in the second quarter, retailers are understandably concerned about publicly sharing sales forecasts, with the exception of Amazon.

Never before have so many retailers been so unsure about the future and the outlook for consumer spending – except for Amazon.

Major retailers such as Walmart, The Home Depot, Target and Lowes reported spectacular sales growth during the first quarter, but none were willing to express an opinion when it came to their outlook for second quarter sales. The source of their consternation is, of course, COVID-19, and each offered a variation on the theme of the uncertainty caused by the virus.

However, it’s worth noting that at the time the companies reported first quarter results they were already three weeks in on the second quarter period. The combination of quarter-to-date actual results, powerful forecasting capabilities and purchase intent signals gleaned from online search behavior should have given the companies a reasonable degree of visibility into their future sales performance. However, they chose not to share publicly their expectations around shopper behavior that would have been implied in a sales or earnings forecast.

One exception to this approach was Amazon. Although it reported results for its first quarter period which runs from January through March on April 30, it did share an outlook for its second quarter period. Amazon said it expects second quarter sales to grow between 18% and 28% to between $75 billion and $81 billion. The company also forecast a $1.5 billion operating loss due to $4 billion in COVID-19 related expenses.

Conversely, Walmart cited “unprecedented variability in the macro environment brought on by COVID-19,” as a reason for withdrawing financial guidance for its current fiscal year.

“The decision to withdraw guidance reflects significant uncertainty around several key external variables and their potential impact on our business and the global economy, including: the duration and intensity of the COVID-19 health crisis globally, the length and impact of stay-at-home orders, the scale and duration of economic stimulus, employment trends and consumer confidence,” said Walmart CFO Brett Biggs.

It was a similar message from Home Depot, which noted, “while sales trends were strong at the end of the first quarter and into the first two weeks of the second quarter, as a result of the uncertainty related to the duration of COVID-19 and its impact on the broader economy, the company is suspending its previously communicated fiscal 2020 guidance.”

Walmart and Home Deport reported results on Tuesday and on Wednesday Target and Lowes also punted on providing guidance.

Target first withdrew its guidance and full year outlook on March 25, given what it called, “the unusually wide range of potential outcomes as a result of the highly fluid and uncertain outlook for consumer shopping patterns and government policies related to COVID-19.” Given persistent uncertainty, Target opted to not provide second-quarter or updated full-year guidance.

“The company delivered strong financial performance in the first quarter, with continued sales momentum in May,” according to a statement from Lowes. “However, there is limited visibility into future business trends in this unprecedented operating environment, which results in an unusually wide range of potential outcomes for 2020 financial performance.”

The unusually wide range of outcomes was certainly reflected in Amazon’s guidance which foresees a potential swing of as much as $6 billion in sales.