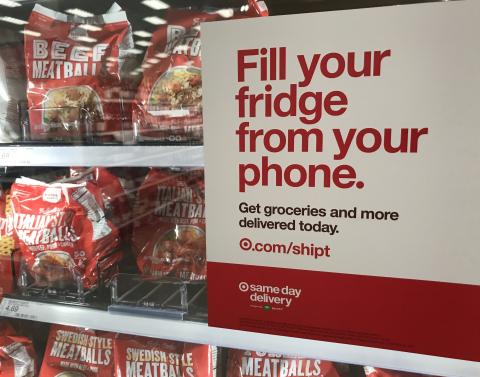 Target Inc. credited stronger sales of food, beauty, adult beverages and apparel for earnings and sales during the third quarter that beat everyone’s expectations, including its own.

CEO Brian Cornell said that the spectacular results are further proof of the durability of Target’s investment strategy. He added that the retailer has an "unmatched suite" of easy and convenient fulfillment options and an assortment of national and private label brands that are winning over more shoppers.

“We've made dedicated investments in our assortment, hours, training, tools and fixtures to prepare our stores to accommodate a meaningful spike in volume of these same-day options during the holidays, while still maintaining the service standards that make them so popular,” Cornell said during an earnings call with analysts.

Target raised its same-store and profit outlooks for the year based on the strength of its ecommerce, grocery, beauty and apparel strategies going into the holiday quarter.

The company said that digital sales surged 31% during the quarter, with its ecommerce options, including delivery and curbside pickup, accounting for 80% of digital sales growth.

According to Target, the retailer is seeing “amazing strength in beauty and cosmetics, which delivered high-single-digit comp growth in the quarter.” In the food and beverage categories, Target saw double-digit growth in adult beverages, along with strength in nonalcoholic beverages and in the bakery and deli departments.

Apparel had comp-sales growth of more than 10% during the quarter. This was driven by even stronger trends in jewelry, accessories and shoes, intimates and sleepwear, and young contemporary and women's ready-to-wear, the company said.

Target, which is renowned in the retail industry for its owned-brands strategy, launched a new private label program for grocery during the third quarter called Good & Gather that has 650 SKUs but will expand by another 2,000 items in 2020.

“The initial response from the guest has been fantastic,” Cornell noted. “I think it's really on trend with what the consumer is looking for in food and beverage from Target. Our team has done a fabulous job with the packaging. Despite our strength in own brands overall, we're under-penetrated from a food and beverage standpoint. So we think there is significant upside over time. And we think, within the next year or so, Good & Gather will likely be our single largest owned brand at Target.”

Target said that traffic during the third quarter was up 3.1%, and the average transaction amount grew 1.4%.

“During the quarter, our guests chose to shop with us more often both in stores and through our digital options," Cornell said. "Among our sales channels, store comps were up 2.8% in the quarter, more than 1 percentage point faster than the second quarter, while digital comps grew 31% and drove 1.7 percentage points of the company's comp growth."

As the company enters the holiday season, Target said that it's the first retailer to offer curbside pickup -- which it calls Drive Up -- in all 50 states, encompassing more than 1,750 locations. Also new this holiday, same-day delivery with Shipt, which offers delivery in as little as one hour, will be available directly from target.com and in the Target app.

Target has invested nearly $50 million in payroll, compared with last year, to get ready for the holiday shopping season.

“In addition, we've doubled the number of team members dedicated to fulfillment, including same-day services, so our guests' orders will continue to be ready in as soon as an hour,” Cornell said.