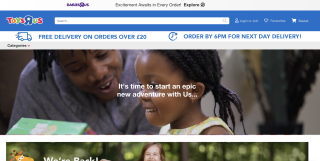 Toys R Us and its sister brand Babies R Us are returning to the U.K. ahead of the holiday shopping season after a nearly four-year absence.

According to an Oct. 20 release, the brands, which are owned by the investment company WHP Global, will return to the UK with websites that feature products from more than 300 brands. The retailer said the digital storefronts are designed to enhance customer experience and will include expert guides and product differentiation.

Toys R Us exited the U.K. in 2018, closing all of its stores in the country after it filed for bankruptcy. The retailer shuttered all of its locations globally that year, including its hundreds of U.S. locations amid its financial turmoil.

As The Washington Post reported, the retailer attempted to stage a comeback in 2019, restarting its online store in the U.S. and opening two locations — one in Texas and the other in New Jersey. The two locations were shuttered in January 2021 during the COVID-19 pandemic. The brand was purchased by the investment company WHP Global in March 2021.

"The momentum behind the Toys R Us brand and its return to key markets, including the U.K. and United States, has been phenomenal,” said Yehuda Shmidman, the chairman and CEO of WHP Global and Toys R Us, in a release. “Since acquiring the brand in March of last year, we have grown its global footprint by 50%, and we are still in early innings for what customers can expect from both Toys R Us and Babies R Us as we head into 2023."

In December 2021, the retailer opened a flagship location at the American Dream mall in East Rutherford, New Jersey. Toys R Us partnered with Macy’s last year and as of this month has pop-up locations inside all Macy’s locations in the U.S while it regrows its physical footprint, as Retail Leader previously reported.

The Toys R Us brand in Australia, which is operated by Toys R Us ANZ, similarly relaunched as an online-only storefront in 2020. Toys R Us ANZ brought in $21.8 million in sales revenue in 2021, according to The Sentiment.