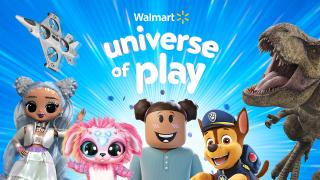 Walmart this week launched two immersive metaverse experiences on the online gaming platform Roblox, which is popular with teens and children.

“Roblox is one of the fastest growing and largest platforms in the metaverse, and we know our customers are spending loads of time there,” said William White, chief marketing officer at Walmart U.S., in a release. “So, we’re focusing on creating new and innovative experiences that excite them, something we’re already doing in the communities where they live, and now, the virtual worlds where they play.”

According to the retailer, Walmart Land will feature several immersive experiences that include a virtual merchandise (verch) store for a player’s avatar, a virtual Ferris wheel, and unlockable tokens and badges. At launch, Walmart Land will feature Electric Island, which is inspired by music festivals and will include interactive elements like a DJ booth, a dance challenge and  Netflix trivia hosted by “Stranger Things” star Noah Schnapp. In October, the space will offer a virtual music festival with performances from Madison Beer, Kane Brown and Yungblud.

Walmart Land also features a “House of Style,” showcasing a virtual dressing room and products from brands like af94, UOMA by Sharon C., ITK by Brooklyn and Bailey, Lottie London and Bubble, according to the release.

The second experience — Walmart’s Universe of Play — will include games, rewards and virtual adventures. The games include characters and products from brands such as L.O.L Surprise!, Jurassic World and Razor Scooters. Players will earn coins to purchase the virtual goods and can work to fill a virtual trophy case by winning challenges, according to the release.

The big-box retailer is doubling down on its virtual offerings, which have included live-streamed shopping events and giveaway contests on platforms like TikTok, Twitter and YouTube. The retailer this month introduced a new Innovation Partners program that included partnerships with TikTok, Snap, Firework, TalkShopLive and Roku.

As CNBC reported earlier this year, Walmart filed for trademarks associated with the metaverse, including ones related to selling virtual items, virtual currency and non-fungible tokens (NFTs), although it's not clear if the retailer plans to use them.

Other retailers have similarly experimented with offering virtual experiences on Roblox, which according to data from the Influencer Marketing Hub, is most popular with young users ages 9-12, who make up more than a quarter of the game’s players. Forever 21 last year released its “Forever 21 Shop City” game on Roblox that allowed players to own and operate their own store. Pacsun earlier this year introduced “Pacworld,” a Roblox game where players could open their own virtual mall.