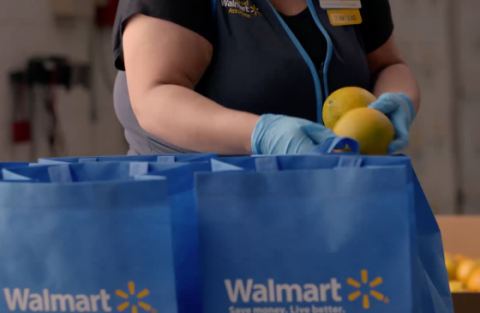 For Walmart U.S., net sales rose 5.3% to $98.2 billion in the quarter, while comparable sales rose 5.2%, which the retail giant said reflects strong underlying business trends, a robust U.S. economy and stimulus spending. On a two-year stack, comparable sales were up 14.5%. Comparable transactions rose 6.1%, though the average basket fell nearly 1%.

Although Walmart’s U.S. e-commerce net sales growth slowed in the quarter (rising only 6% compared to 97% in the year-ago period) as more shoppers returned to in-store shopping, online growth on a two-year stack more than doubled, increasing 103%.

“We had another strong quarter in every part of our business,” Walmart President and CEO Doug McMillon said in a media release. “Our global e-commerce sales are on track to reach $75 billion by the end of the year, further strengthening our position as a leader in omnichannel. We grew market share in U.S. grocery, added thousands of new sellers to our marketplace, rapidly grew advertising businesses around the world, and we’re finding innovative ways to commercialize our data and build technology. We have a unique ecosystem of products and services designed to serve customers in broader, deeper ways, and we’re grateful to our associates for making it all happen.”

Walmart CFO Brett Biggs said during the earnings call that food sales grew $2.4 billion versus a year ago, due to value-seeking shoppers and better stock availability management for categories like produce and meats. Biggs added that same-store sales gained momentum each month during the quarter.

McMillon also highlighted progress Walmart is making in new areas, including adding thousands of online sellers to its third-party marketplace and nearly doubling advertising sales in Walmart U.S. in the quarter versus a year ago.

“Even as the pandemic continues to evolve, consumers remain happy shopping online as evidenced by Walmart’s continued success in this realm,” Brent Ramos, director of product search at Adswerve, told Retail Leader. “Much of the e-commerce success is a direct result of Walmart’s online advertising strategies where visual search ads and consumer-driven marketing tactics have resulted in increased traffic and engagement with their target audiences. Walmart’s display ads, visual search capabilities and sponsored products are highly focused on the needs of their consumers and are seen across all of their services, including their website and app. It’s this type of advertising and Walmart’s ability to hyperfocus their marketing tactics to match their customers’ needs that continues to set them apart from other retailers as the e-commerce boom persists.”