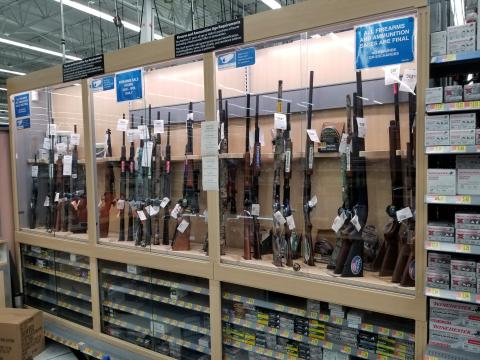 Walmart sells firearms in about half of its 4,700 stores in the United States.

Just days before the U.S. presidential election, Walmart took all guns and ammunition displays off the sales floors of its U.S. stores in a bid to avoid potential theft of weapons if retailers are burglarized amid social unrest, and then abruptly reversed course, replacing the displays, according to published reports.

Under the rescinded policy, customers could still buy guns and ammunition upon request at Walmart, which carries firearms in about half of its 4,700 stores in the United States, reported the The Wall Street Journal, which also noted the return of the items to the retailers' shelves.

“We have seen some isolated civil unrest and as we have done on several occasions over the last few years, we have moved our firearms and ammunition off the sales floor as a precaution for the safety of our associates and customers,” a Walmart spokesman told the Journal.

In a letter, the company had asked staffers to take guns and ammo from shelves “due to the current unrest in isolated areas of the country and out of an abundance of caution.”

However, "as the current incidents have remained geographically isolated, we have made the decision to begin returning these products to the sales floor [on Oct. 30],” a company spokesman noted by way of explanation for the change in policy, according to NBC News.

The decision and its hasty reversal came in the wake of violent protests and looting in Philadelphia after the fatal police shooting of a Black man with a knife. Walmart also removed firearms and ammunition from display after the killing of George Floyd by Minneapolis police, when several of retailer’s stores were vandalized.

Although it’s still a major seller of guns and ammo, Bentonville, Arkansas-based Walmart ceased selling ammunition that can be used in semiautomatic rifles and handguns after a mass shooting at an El Paso, Texas, Walmart that killed 23 people. It also raised the minimum age to buy guns or ammo to 21 in the wake of the deadly Parkland, Florida, high school shooting in 2018, and has phased out selling assault rifles and handguns. According to CEO Doug McMillon, the store’s firearm offerings are meant to appeal to hunters.

The newspaper also noted that demand for guns was way up, citing the Federal Bureau of Investigation’s measurement of background checks, a proxy for sales.