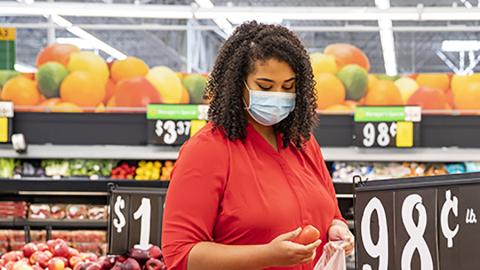 Walmart and its Sam’s Club division have revealed that they will make the wearing of face coverings mandatory for customers in all of their stores, beginning next week.

“As the number of confirmed cases has spiked in communities across the country recently, so, too, have the number and types of face covering mandates being implemented,” noted Dacona Smith, COO, Walmart U.S., and Lance de la Rosa, COO Sam’s Club, in a joint blog post. “Currently, about 65 percent of our more than 5,000 stores and clubs are located in areas where there is some form of government mandate on face coverings. To help bring consistency across stores and clubs, we will require all shoppers to wear a face covering starting Monday, July 20. This will give us time to inform customers and members of the changes, post signage and train associates on the new protocols.”

Appealing to the public to help stem the spread of COVID-19, executives observed that wearing a mask “is a simple step everyone can take for their safety and the safety of others in our facilities.”

As well as posting clear signage in front of stores, Walmart has created the role of health ambassadors, identifiable by their black polo shirts, who will be stationed at store entrances to remind those entering to put on masks if they try to enter without them. To help ensure consistency as this new process is implemented, all stores will have just one entrance.

Sam’s Club associates will follow a similar procedure, with the chain also providing complimentary masks if a member arrives without one, and offering masks for purchase in clubs.

Smith and de la Rosa admitted that “it may not be possible for everyone to wear a face covering,” pointing out that associates were being trained to deal with such situations, and that the retailers were “currently considering different solutions for customers when this requirement takes effect.”

While predicting that most customers would comply with the requirement, the officials acknowledged, in something of an understatement, that “some people have differing opinions on this topic.”

Back in April, Walmart made face coverings mandatory for associates, after first making them optional.

Various food retailers have already made masks a requirement for shopping in their respective stores, while the United Food and Commercial Workers Union and more than 100 health experts have called for mask mandates in all 50 states to protect front-line grocery workers and shoppers alike, and the Retail Industry Leaders Association has called for similar legislative action as part of its Blueprint for Shopping Safe. The push for required masks in retail settings comes as reports continue to surface of extreme or even violent incidents across the nation involving customers refusing to wear face coverings in stores.

Just after Walmart's announcement, the Washington, D.C.-based National Retail Federation issued a statement urging all retailers to adopt a nationwide policy requiring customers to wear masks amid the pandemic, referring to the the world largest retail chain's new requirement as a possible "tipping point in this public health debate."