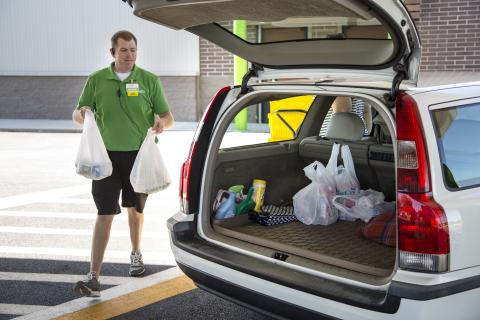 Shoppers visited Walmart stores less often, but bought more per visit thanks to the convenience of grocery pick up.

Those numbers, coming on top of an already highly productive store base, would surely have been higher except company executives detailed significant supply chain distruptions which led to stock out situations. Even so, Walmart U.S. total sales increased 9.5% to $93.3 billion.

The composition of that growth is noteworthy and reflects a continuation of pandemic driven changes in shopping behaviors that began during the first quarter and could become an ongoing reality for retailers. For example, Walmart reported a massive 27% increase in the size of its average ticket, but said the volume of transactions declined 14%.

During the quarter ended July 31, Walmart’s network of 4,753 stores, of which 3,569 are supercenters, essentially functioned as fulfillment centers for digital orders and drove a 97% increase in e-commerce sales. It is worth noting that Walmart considers orders fulfilled by stores, whether for delivery or pick up, as e-commerce sales since they were initiated digitally. Grocery pick up service was available from 3,450 Walmart stores at the end of the quarter and same day delivery was provided from 2,730 locations.

Second quarter sales started strong, both in-store and online, particularly in general merchandise, helped by government stimulus spending, according to the company. Grocery sales had another strong quarter, but as stimulus funds tapered off, the company said sales started to normalize with comps during July growing more than four percent.

Walmart said its food sales increased in the high single-digits with broad-based strength across most categories, while consumables sales were led by household chemicals and paper goods. It also noted pick up and delivery services continued to experience all-time high sales volumes. Government stimulus spending also helped the performance of general merchandise categories where sales grew and there were fewer markdowns.

Walmart’s 599 unit Sam’s Club division experienced a slightly different effect during the second quarter in terms of traffic and ticket. Sales there increased 8.8%, but comps increased 13.3%, excluding fuel. Unlike at Walmart, the number of transactions increased 8.7% and the average transaction size also increased 4.3%.

Sam’s reported broad strength across categories, led by food and consumables, driven by strong member growth and a benefit from government stimulus and the SNAP program.