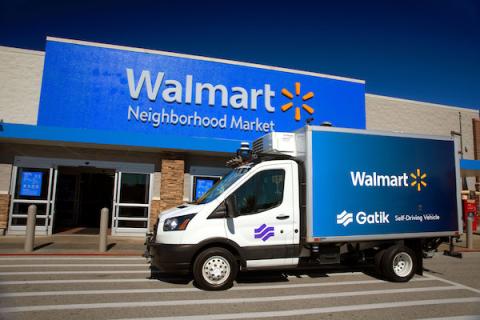 The route delivers customer orders from a Walmart dark store to a neighborhood market through a partnership with Gatik, an autonomous middle mile logistics company that focuses on short-hauls for retailers. The route is a breakthrough for autonomous delivery, but does not yet encompass B2C delivery.

The deployment with Walmart is the first time an autonomous trucking company has removed the safety driver from a commercial delivery route on the middle mile.

The deployment comes at a time when truck drivers are in short supply compared to the rising demand for customer deliveries. A labor shortage across the retail industry has impacted many major retailers that have raised wages and expanded benefits to recruit talent. The autonomous fleet could potentially ease delivery demands if scaled.

Gatik and Walmart received approval to remove the safety driver from Gatik’s autonomous trucks in December 2020. It is the first such approval from the Arkansas State Highway Commission. Gatik tapped state and local leadership and emergency services as part of a comprehensive stakeholder engagement strategy to operate the driverless deliveries.

Gatik maintains a 100% safety record across its operational sites in North America since commencing commercial operations in 2019.