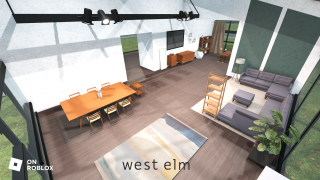 The furniture designer and retailer West Elm announced this week that it is entering the metaverse with an immersive experience on the gaming platform Roblox.

West Elm, which is owned by Williams-Sonoma, is calling the experience “West Elm Home Design.” In a release, the company said it was the first specialty home retailer to join the gaming platform. The experience will consist of two virtual areas, The West Elm Hub and The West Elm Neighborhood.

The hub area will feature a virtual furniture store, coffee shop and merchandise boutique, the retailer said. The furniture and other goods available are designed to be photorealistic and “nearly identical” to real West Elm products, according to the release. In The West Elm Neighborhood, Roblox players can snag virtual homes and add the virtual furniture, lighting and other products. Their avatars can also wear West Elm-branded T-shirts, hats and bags.

“We’re excited to expand our company into the metaverse and connect West Elm with the millions of daily Roblox users around the world,” said Laura Alber, Williams-Sonoma’s CEO and president, in the release. “The launch of West Elm Home Design makes our company the first specialty home retailer on the powerful Roblox platform, and we look forward to welcoming users to the West Elm Neighborhood.”

The metaverse experience will also include design challenges, mini-games, obstacle courses, selfies and hangouts, the release said. Players can earn tokens, prizes and giveaways within the experience, according to West Elm.

West Elm is the latest in a string of retailers to join Roblox, the uber-popular gaming platform. Walmart in September announced two metaverse experiences on Roblox, one that offers virtual toys and games, and another that includes virtual merchandise and will host a music festival in October, Retail Leaderreported.

Roblox has 45.5 million active users according to data from the Influencer Marketing Hub, and it’s most popular with young users ages 9-12, who make up more than a quarter of the game’s players.

Fashion retailers have also entered the metaverse through Roblox. Forever 21 last year released its “Forever 21 Shop City” game on Roblox that allowed players to own and operate their own store. Pacsun earlier this year introduced “Pacworld,” a Roblox game where players could open their own virtual mall.

West Elm said it created the metaverse experience to celebrate its modernist design aesthetic across generations, and the retailer said it would update the game to include its latest assortment of products.