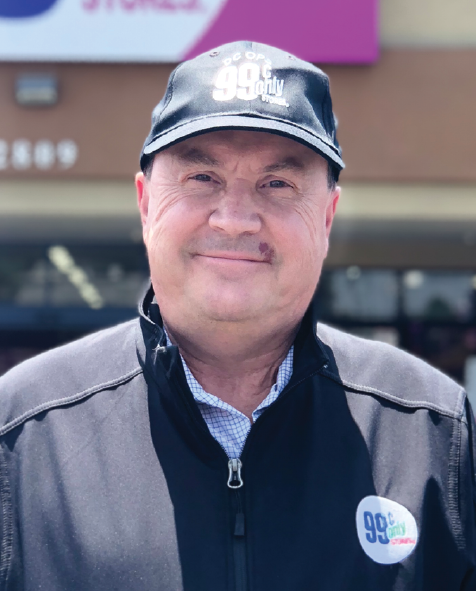 Jack SInclair, CEO of 99 Cents Only

Ninety-Nine Cents Only Stores is the food retailer no one knows. The company’s nearly 400 stores derive close to 80% of their sales of $2.4 billion from categories such as fresh, grocery and consumables that overlap with those of traditional grocers and discounters. Even so, 99 Cents Only isn’t a food retailer in the classic sense and is typically lumped into the poorly defined category of dollar stores.

“We’re not a dollar store, we are an extreme value retailer,” said 99 Cents Only CEO Jack Sinclair. “Our aspiration is to give a lot more people access to the type of value we provide. We are such a unique business.”

Sinclair has an aversion to the phrase “dollar store” because he doesn’t think it conveys an image of quality and can hinder the company’s ability to source branded goods. It also doesn’t accurately reflect a business model highly differentiated from other companies who have the word dollar in their name such as Dollar Tree, Family Dollar and Dollar General.

The same formula is in play at 99 Cents Only, which offers virtually all of the same categories as a supercenter to varying degrees and on a much smaller scale. The key to the entire value proposition and the source of Sinclair’s disdain for characterizing the company as a dollar store is an obsession with offering extreme value. It is that approach to pricing and quality that he’s convinced will enable the 99 Cents Only store concept to prosper in existing markets and grow to new areas.

“I would like us to be a $30 billion business,” Sinclair said, quickly conceding that attaining such a goal is a long way off. “When we can get there will depend on a lot of factors, but we can certainly grow this business from $2.4 billion to $4 billion in relatively quick terms because there are all these customers in the markets we operate in. Even without opening a new store we can grow to $4 billion because the customers are there and the opportunity exists to create a new store environment.”

If 99 Cents Only is to achieve ambitious growth goals it will be due to the leadership of senior executives who led businesses earlier in their careers that collectively generated sales of more than $200 billion. For starters, Sinclair is a name very familiar to those in food retailing in the U.S. and globally. He joined 99 Cents Only in July 2015 as chief merchandising officer reporting to then CEO Geoffrey Covert, a former top executive at Kroger and Procter & Gamble. Sinclair replaced Covert as CEO in January. Prior to 99 Cents Only, Sinclair spent seven years as Executive Vice President of Food at Walmart and the native of Scotland also held senior roles at Tesco and Safeway Plc in the U.K.

Leading 99 Cents Only operations in the role of President and COO is Jason Kidd. He was elevated to that position in January of this year after previously serving as Senior Vice President of Operations. Kidd joined the company in September 2014 after holding a variety of key operations and merchandising roles at Sam’s Club beginning in 2007.

During his time at Sam’s Club, Kidd worked alongside veteran food retailing executive Michael Heintzman who now serves as Vice President of Merchandising and leads 99 Cents Only efforts in Texas. He practically grew up in Kroger stores, cleaning the inside of trucks at age 16 before advancing to key roles in merchandising. He left Kroger in 1998 and spent 15 years at Sam’s Club where he last served as SVP/GMM over food before retiring in 2015.

Like his boss, Heintzman has a penchant for value retailing, understands the nuance of treasure hunt merchandising and the role brands.

“Brands are very important to our customers,” Heintzman said. “Our customers vary widely, but they all come in for value and they trust brands.”

That should be music to the ears of branded suppliers under duress from major retailers pursuing ambitious private label efforts on one front and the headwind caused by the popularity of niche brands on the other. At 99 Cents Only, big name brands are a key element of the value proposition and generally purchased as closeouts.

“Brands are very important to our customer and we can move volume quickly on key branded items,” Sinclair said, noting the company’s relationship with brands is evolving. “We are trying to establish more re-orderable business with brands and they are increasingly thinking about the value channel. We are at the forefront of a lot of very interesting conversations.”

The appeal of the 99 Cents Only store experience for shoppers is discovering the next great deal on an item they didn’t know they needed until presented with an irresistible price. The so-called treasure hunt concept is not new, companies such as TJX, Costco, Sam’s Club and rival Dollar Tree, employ it with great success as well. The 99 Cents Only model is different in that about half the merchandise is re-orderable product, but the other half is closeout merchandise or opportunistically purchased goods.

However, one thing they always know 99 Cents Only will have is an extreme value on whatever it is that is offered, which is why the company’s marketing encourages shoppers to visit its stores before going elsewhere.

“The principle is people will come to us first and see what we’ve got. We want to help them save all the money they can before going other places where it will be more expensive,” Sinclair said. “We know people are not going to do all their shopping with us so we are an extra trip. In the context of today’s marketplace you are only able to do that because you offer an extreme value.”

And that value has to be evident on every single item, according to merchandising executive Heintzman, echoing a philosophy well-established in the limited assortment world of warehouse club retailing.

“Customers judge you by your worst item so you have to focus on every item and make sure it is an extreme value,” the former Sam Club merchant said. “In our business, we always want to buy short to ensure that we sell through and sell out. If I think we can sell 100 units of something I will buy 90 so we can get on to the next item.”

The company’s goal of showcasing value is aided by the fact that the items it sells aren’t necessarily 99 cents, despite the name on the front of the building. The company deviated from rigid adherence to the 99 cent approach 15 years ago, selectively introducing high price points but typically staying below $10, which allowed more latitude when it came to procurement. Today, about 90% of the Skus offered are 99 cents and Sinclair foresees that figure approaching 80% over time.

The future of what 99 Cents Only would like its stores to be is on display at several Houston area locations that are a study in contrasts. A newly re-opened store at 10220 Almeda Genoa Road is the type of store 99 Cents Only would like to have everywhere. The store was flooded in August 2017 after Hurricane Harvey inundated the Houston area and it reopened in June 2018 amid great fanfare and a warm reception from the local community.

“We had to rip everything out and the reopening was delayed because there was so much recovery work that needed to be done throughout the Houston area,” said Allen Guzman, one of the company’s Houston area district managers.

An old vinyl floor was removed and the concrete was polished. New fixtures, paint and equipment were installed and a fresh graphics package with the company’s quirky slogans was added to outer walls. Because the fresh category is so important, the store installed a cooler capable of holding 15 pallets, a 32 foot wall of coolers and two cold tables to showcase opportunistically purchased produce such as 99 cent heads of cauliflower and 49 cent a pound bananas.

Guzman also oversees a store in nearby Pasadena that wasn’t flooded by Harvey and has yet to be upgraded. The store is clean, well-organized and offers extreme value, but has a dated look that comes from what Sinclair said was years of underinvestment in stores.

“I want more people to get access to what we offer so we need better stores. We need to invest to make them better,” Sinclair said.

Improving store operations will go a long way toward helping the company attract more shoppers but so will changing shopper perceptions around what 99 Cents Only is and how it is able to deliver value.

“There are three reasons that customers who should be shopping with us aren’t. The first is store conditions aren’t where we want them to be. The second is we get mixed up as being a dollar store, which were not, and some customers don’t regard themselves as dollar store customers but they lump us in with the others,” Sinclair said. “It is the stigma of being a dollar store that we have to break out of. We’ve done it well in the Los Angeles area but not as well in our other markets. The third reason is they can quite believe the prices. They think there must be something wrong with the merchandise.”

Solving those issues, two of which are marketing related and one operational, will go a long way toward facilitating future growth, which for the time being is focused on existing markets.

“There is no limit to where we can go as long as we offer extreme value,” Sinclair said, noting that California, Texas, Arizona and Nevada offer ample near term opportunity.

“We’ve only got 50 stores in Texas but we have a warehouse that can handle 250 stores. There is no reason why we can’t get to 250 stores in Texas,” Sinclair said. Clearly enthused by the prospects for the uniquely positioned retailer he leads, Sinclair said the company will be careful to not expand too fast because, rapid expansion “is one of the things that got this company out of kilter in the first place.”

Wherever the company expands it is sure to find a Dollar Tree waiting. Although Sinclair will point out differences, Dollar Tree is the closest thing to a direct competitor 99 Cents Only has, even though its stores are less than half the size, lower volume, sell less food and everything is a dollar. Dollar Tree has a considerable head start with 6,425 U.S. stores, annual sales of $11.2 billion and a stated goal of operating more than 10,000 locations. The company has also been aggressively adding frozen and refrigerated coolers to stores with those fixtures now present in more than 5,200 stores with another 500 location getting new equipment this year.

If the competition is concerning to Sinclair it is not evident. His company is owned by Ares Management and the Canada Pension Plan Investment Board, major investors in retail with large positions in, or outright ownership of, companies such as Smart & Final, Guitar Center, Nieman Marcus and Floor & Décor.

“They are quite an investor in retail and have a real perspective on retail,” Sinclair said.

So does the senior leadership team at 99 Cents Only, which is something the company didn’t have before, resulting in costly missteps such as a poorly executed expansion to Texas. Sinclair, Heintzman, CFO Thornton and COO Kidd have all managed significantly larger businesses and delivered results. While Sinclair said he loved every minute of his time at Walmart, the company’s size created challenges.

“Ours is not an insignificant business, but you can manage it and make a difference. You could at Walmart too it just took a couple years to do things that I can do here in a couple months,” Sinclair said. “I do genuinely feel like there is a purpose to what we do. I’ve worked for a lot of retailers and when you walk around stores most people when they come up to you don’t say, ‘thanks for being here,’ but I get it all the time now and it’s nice.” RL