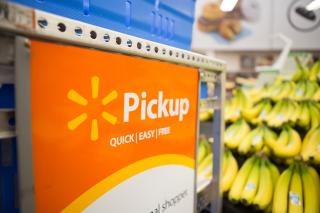 Between a positive economic climate, observable operational improvements and a solid value proposition, Walmart is enjoying sales momentum like it hasn’t seen in a long time. And it looks like the momentum is going to continue judging from comments Steve Bratspies, Chief Merchandising Officer, Walmart U.S., made last week at Goldman Sachs Global Retail Conference.

The most notable comment was that stores have been offering grocery pick up service are still producing positive same store sales. That’s a big deal because Walmart will have pick up service at 3,100 locations by year end and since two thirds of those came online in the past two years they are expected to provide a strong tailwind to comps.

“It's proving to be highly incremental to our business and bringing in new customers with strong repeat. The average basket size is about two times what a standard grocery basket is, so obviously we're excited about that,” Bratspies said.

The baskets could get even bigger as the service evolves to simply pickup from grocery pickup as the ability to order general merchandise items is added and the available assortment is rapidly expanded.

Walmart, like most retailers, no longer care where or how shoppers choose to engage, only that they do so. That’s why it’s building an omnichannel ecosystem of fulfillment modalities. The newest example is an in-home delivery service rolling out this year to one million customers in Pittsburgh, Vero Beach, Fla., and Kansas City. If it works, the service could be expanded as rapidly as Walmart added grocery pickup.

Meanwhile, Amazon continues to struggle with the issue of fake product reviews related to unscrupuplous sellers who are gaming the company's third party marketplace. The Federal Trade Commission is also widely reported to be investigating Amazon's treatment of sellers in its marketplace, looking for instances of unfair and anticompetitive treatment.