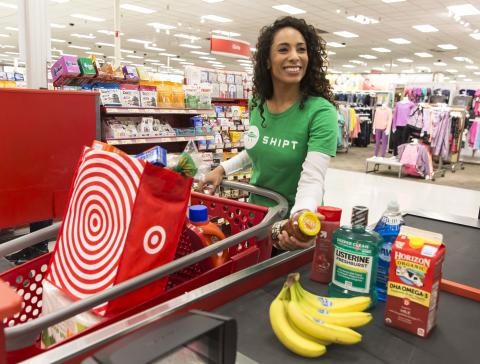 On demand workers in the gig economy, such as this Shipt shopper at a Target store, have become an indispensible part of the retail world.

If there was any uncertainty about the upward trajectory of automation and the gig economy in the retail industry, one need only look at Amazon’s recent move in San Francisco. The company opened its sixth cashierless Amazon Go store on Oct. 23, (it’s third market after Seattle and Chicago) outfitted with mostly automated and freelance labor: sensors and artificial intelligence have replaced cashiers, and gig workers will be delivering packages and groceries to customers.

The San Francisco opening is a curtain warmer to Amazon’s reported plans to open at least 3,000 more Go stores across the country. Rumors of a roll out rattled the retail industry already reeling from disruptive forces, and it prompted an outcry from union activists worried about job losses. But what Amazon actually just did is solve a big problem for retailers: It figured out how to greatly reduce the need to find cheap labor in the face of wage hikes and a tightening labor market. The Amazon news is a fresh example of the new labor dynamic in the retail industry, as companies race to follow the lead of Amazon, who seemingly knew early on that it could leverage on-demand workers and solve the (escalating) human capital dilemma in retail by investing in technology, automating some tasks and outsourcing others. Over the past few months, retailers such as Kroger, Walmart and Target have moved quickly to adapt to the new labor market and hinted at a future that relies more on checkout via app and less on humans, more on freelance grocery delivery and less on shopping from shelves.

Keith Ryu, the CEO and co-founder of Fountain, a hiring and onboarding platform for freelance workers, says that the burgeoning gig economy is perfectly poised to fill retail job gaps. Ryu’s company helps retailers such as Safeway and Shipt fill jobs with gig workers.

“More and more we are seeing retailers start to adopt and roll out a gig mobile type of employment model. That trend has been really increasing over the past year, especially after the Target acquisition of Shipt and Amazon buying Whole Foods Market,” Ryu said.

While Target works to expand Shipt all over the U.S., Kroger has gigified, or outsourced, its grocery delivery to other third-party services, such as Instacart, and their shoppers and cars. The grocery chain has also just partnered with Nuro to launch in Arizona a test of driverless grocery delivery, which it says it plans to expand quickly.

“You will be the go-to-person on the ground as we launch our first satellite office/city,” Nuro says in a help wanted ad on its website. “The City Manager will develop and oversee day-to-day operations of one of our first major delivery services. You will be Nuro’s go-to-leader on the ground as we launch new partnerships and will help take our delivery service from 0 to 1 in the first city with our first partners. This is a high impact role which demands great breadth and depth of team management, customer obsession, and determined execution.”

Kroger is also installing robots in warehouses with U.K. grocery partner Ocado. The supermarket operator reached a deal in May to partner with and increase its investment in Ocado for an undisclosed amount. The companies recently confirmed the Cincinnati area will be home to the first of 20 planned automated grocery fulfillment centers.

Meanwhile Walmart has been pulling out all the stops on tech and gig-type initiatives, most recently outsourcing furniture and electronics assembly to Handy, an online marketplace for home services.

“Our program with Handy enables us to eliminate the friction of installation and assembly, and offer customers a convenient, delightful experience from start to finish. We know Handy’s services are going to be a big help to our busy customers,” said Daniel Eckert, senior vice president, Walmart Services and Digital Acceleration, Walmart U.S.

In June, Amazon announced a new program called Amazon Delivery Service Partners to address growing last-mile challenges. None of the new Delivery Service Partners nor their staff will be employed by the company. An initial $10,000 will go to helping them start an independent business that has to begin with at least five delivery vans and ramp up to 20 vans over an undisclosed period of time. People have to apply at logistics.amazon.com and be approved by Amazon.

“We have great partners in our traditional carriers and it’s exciting to continue to see the logistics industry grow,” said Dave Clark, Amazon’s senior vice president of worldwide operations. “Customer demand is higher than ever and we have a need to build more capacity. As we evaluated how to support our growth, we went back to our roots to share the opportunity with small-and-medium-sized businesses. We are going to empower new, small businesses to form in order to take advantage of the growing opportunity in e-commerce package delivery.”

A workforce for next-gen retail

Relying more on automation and gig economy workers isn’t a new cost savings method for retailers. In fact, retailers have been leveraging part-time, contracted labor to fulfill short-term and seasonal jobs (gigs) for years. But what’s different is that today’s workers are increasingly seeking more flexible, non-traditional jobs. And thanks to technology, it’s easier than ever for them to find these jobs, and for retailers to fill these jobs — a win-win in an ever-tightening labor market.

In fact, as the on-demand economy evolves, retailers may find that a smaller, better-compensated core of flex employees are happier in their jobs and perform better. Not only does the gig economy provide flexibility to gig workers, but it also offers significant flexibility to organizations, especially those in the retail industry. As more retailers embrace pop-up shops and other innovative projects, for example, gig workers are a great fit for those kinds of jobs and in high demand. So who are these workers and where do they live?

In a new report released in September, the JPMorgan Chase Institute, a unit of the global bank, found that among 23 states and 26 cities, Nevada and San Francisco had the highest “online platform economy worker” participation rates, with roughly 2.8 percent of families generating platform earnings in March of this year. The non-employed and men were more likely than the employed and women to participate on transportation platform gigs, in which drivers transport people or goods (such as in grocery delivery).

One thing is for sure: The popularity of gig work shows no signs of slowing down. A leading annual report on the gig economy, the State of Independence in America, paints another picture of the 42 million Americans who work as independent professionals, contractors, consultants, freelancers, side giggers and more. The eighth iteration of the report shows that even amid record low unemployment and the strongest jobs market in decades, independent work remains a viable and desirable career path for many Americans. More than 41 million people, representing 31 percent of the private U.S. workforce, were working independently as of 2017, according to MBO Partners. The group includes everyone from Instacart shoppers to Lyft drivers to the in-store demonstrators at the grocery store. The 2018 study also showed how four key trends emerged, each of which mirrors trends in the overall economy.

The new norm is now more likely to be a mix of traditional and independent experience throughout one’s lifespan. An individual’s career path may include working at a payroll job, working as a full-time independent, and having a side gig while employed at a payroll job. It’s not necessarily an either or choice.

And many of those Americans working gig jobs are working in retail. Virginia-based job site Snag, the largest platform for freelance work in the U.S., connects workers with open shifts at various employers, such as restaurants, hotels and retailers. Snag connects more than 60 million active job seekers with employment opportunities at 300,000 employer locations in the U.S. and Canada. In 2017, Snag launched Snag Work, an on-demand platform that instantly connects hourly workers with available shifts across a variety of employers and locations.

More than anything, though, Snag fills a lot of retail positions. According to Snag CEO Fabio Rosati, more than 5 million workers are hired each year via Snag, representing approximately one out of every four restaurant, retail and hospitality hires made in the U.S.

Fountain CEO Ryu says a lot of retailers are realizing that while filling jobs with gig workers has certain benefits, it also comes with hiring headaches.

“There are a lot of challenges with the hourly workforce that don’t exist when you are hiring regular employees,” Ryu said. “About 90% of hourly, gig-type candidates don’t have resumes. About 50% don’t show up for interviews. Since 2015 we have helped Shipt enable a lot of their growth. What they really needed was a quick and easy way to bring on a large workforce to be able to launch into new markets really quickly.”

Shipt is now delivering groceries to nearly 70 million households in 200 markets across the country.

“Safeway is also rolling out same-day delivery across its markets as well. And so with the increased competition for these types of workers what’s really important for retailers is that within 24 hours of a candidate applying is getting in contact with them and bringing them in for an interview. Candidates are really driving the process at this time.”

The rise in retail gig work comes as state and local leaders are trying to regulate and turn many of these types of jobs into regular employment. In April, the California Supreme Court handed down a ruling that could make it harder for companies such as Shipt, Roadie and others to claim their workers are independent contractors under that state’s wage laws. The court ruling applies only to California, but companies worry that, along with blowing up their operations in the nation’s most populous state, it could be a harbinger of things to come elsewhere.

Over the months since, the leaders of some last-mile companies such as Instacart and Postmates have been lobbying state officials. The companies are pushing to neutralize the ruling either through legislation or through executive action by the governor — moves that would have implications across the country for retail, other sectors and their workers.

“The magnitude of this issue requires urgent leadership,” nine companies wrote in a July 23 letter obtained by Bloomberg, which warns of the ruling “stifling innovation and threatening the livelihoods of millions of working Californians” and says that without political intervention it will “decimate businesses.” The letter was sent on behalf of Uber, Lyft, Instacart, DoorDash, Postmates, TaskRabbit, Square, Total System Services and Handy. It was addressed to the governor’s secretary of labor and cabinet secretary.

The U.S. Chamber of Commerce has also expressed concern over the regulation of gig workers and is already lobbying state and federal officials on behalf of its member companies. Yet despite any legal challenges, the speed at which modern retail is evolving means that companies can no longer rely on traditional labor. And gig-based retail jobs will only grow as retailers and workers further embrace technology. Retailers need to understand the demands of today’s labor dynamics and create on-demand workforce strategies that will help them build the retail environment of the future.