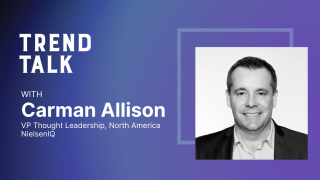 As consumers stock up on gifts, food and other holiday goods during the holiday season, they’re contending with continued economic pressures.

Inflation has continued to slow in recent months, though prices are still noticeably higher for consumers than they were during the last holiday season. According to Dec. 13 data from the U.S. Bureau of Labor Statistics (BLS), the Consumer Price Index (CPI) showed prices increased 7.1% compared to November 2021 and rose 0.1% compared to October, Retail Leader previously reported.

Overall food costs rose by 0.5% from October to November, according to the BLS data, as did the food-at-home index (accounting for food purchased for home preparation at grocery stores) and the food-away-from-home (restaurants) index.

“I know we’re talking about the fact that most consumers are feeling the economic pressures, and that’s a reality,” he said. “But we also still have to remember that there are a lot of consumers right now that do have a lot of spending power. Getting to know your consumer, and where your consumer falls on the pendulum as far as their changing behaviors, I think is very important.”

Allison said that now marks a great time for retailers to innovate, despite conventional wisdom that might suggest a more cautious approach during economic uncertainty because innovative products that offer differentiation from other brands and retailers can help consumers justify spending more. Still, price transparency is key.

“I still think there’s a great opportunity for retailers to vary their assortment,” Allison told Retail Leader. “At the end of the day, if you’re carrying the same product as somebody else, what’s going to break the tie is typically price. Consumers are out doing research: They’re looking at apps; they’re pulling out their phones in the store to see who has the best price point; they’re going online.”

In terms of whether brick-and-mortar retail or e-commerce would reign supreme this holiday season, Allison predicted that both would play a role. E-commerce is still experiencing faster growth — about 2:1 compared to physical stores — but that growth is starting to slow, he said. But physical retail is paramount because it provides opportunities for customers to see and touch items, and it’s increasingly serving as a distribution center for e-commerce sales. Macy’s, for example, recently converted space at about three dozen stores into “mini” distribution centers.

Hear more about what NielsenIQ is working on by listening to Retail Leader’s full interview with Allison. Subscribe to Trend Talk wherever you listen to podcasts.