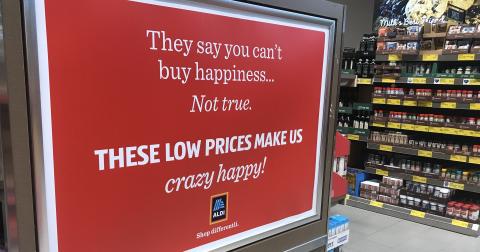 July was a busy month for Aldi. The food retailer opened its 2,000th location and also nabbed the distinction of being chosen by consumers as the Value Leader in a national consumer survey for the 10th consecutive year.

Aldi said it earned the title of Value Leader in the Market Force Information Grocery Benchmark Study for the 10th consecutive year. The study included a survey of more than 10,000 U.S. consumers regarding their views on elements of the grocery shopping experience such as checkout speed, convenience, store cleanliness and value.

"Ten years at the top is validation of our commitment to offering customers the lowest possible prices on their grocery needs, every single day — and that will never change," said Jason Hart, CEO of Aldi U.S. "Customers have always counted on us for our low prices and we're thrilled to also be recognized as the nation's most preferred private label brand."

The value leader distinction comes as Aldi has accelerated its new store growth and remodeling activity in recent years. The company recently surpassed 2,000 locations, although it did so with little fanfare and no public announcement. The privately held company tends to share few details about its operations, but in June 2017 did indicate it planned to operate 2,500 stores by the end of 2022. At the time, the company operated roughly 1,600 stores.

Although Aldi was named Value Leader for the past decade, Market Force did not publicly disclosed details about how other notable retailers with a low price value proposition fared in the value rankings. Instead, the company released overall findings as part of a Composite Loyalty Index in June. On that list, Aldi ranked sixth behind top ranked Trader Joe’s, Wegmans, H-E-B, Publix, and Harris Teeter.

To arrive at those results the firm surveyed 10,000 U.S. consumers asking about their grocery shopping habits including brand preference, customer experience, brand engagement, and brand awareness. Respondents provided feedback on their technology usage, coupons gathered from printed circulars, available food options, and meal kits to reveal which customer experience attributes helped high performing brands stand out from the competition. That data was averaged to evaluate each brand on an aggregation of overall experience and likelihood of a consumer to recommend that brand to friends or family, which resulted in the Composite Loyalty Index.

"The insights Market Force provides through our annual supermarket study serve as a meaningful performance measure in the marketplace," said Ira Davies, Global SVP of sales and marketing for Market Force. "It is great to see our research affirm the value proposition of Aldi as the industry landscape has evolved over the last 10 years. Consumer feedback consistently shows that ALDI leads the marketplace in value."