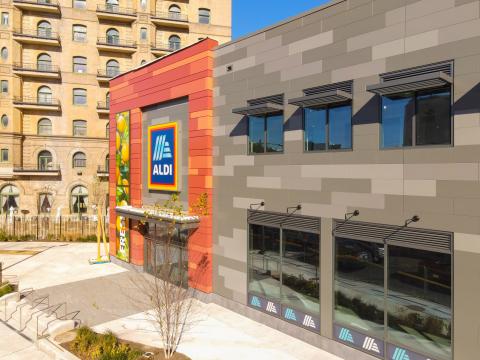 Debuting on Dec. 3, Aldi's downtown Philadelphia store is on the ground floor of a new 14-story residential building and has large windows for increased natural lighting.

Aldi will open its first mixed-use development store in Philadelphia, at 1300 Fairmount Avenue, on Thursday, Dec. 3. The location, Aldi’s 11th in the City of Brotherly Love and the retailer's eighth new store in the metropolis since 2015, also offers the most floor space of the deep-discount retailer’s Philadelphia stores, with more than 15,000 square feet and six aisles.

This growth is driven by the company’s more than $5 billion investment nationwide to open hundreds of new stores and remodel thousands of existing locations. Through its aggressive expansion plans, Aldi aims to become the third-largest U.S. grocery retailer by store count by the end of 2022.

The downtown Philadelphia store is on the ground floor of a new 14-story residential building. Its design features large windows for increased natural lighting and locally inspired wall decals, including maps of the historic surrounding district and famous city monuments such as the Liberty Bell.

“Opening new grocery stores in the heart of a bustling city doesn’t happen every day, and we’re proud to provide even more Philadelphia residents easy access to fresh groceries at unbeatable prices,” said Bob Grammer, Center Valley division VP for Batavia, Illinois-based Aldi U.S., which operates more than 2,000 stores across 36 states. “We’ve been serving Philadelphia customers for more than 25 years, and we continue to open new stores in a variety of locations – cities, suburbs and rural areas – because savvy shoppers want Aldi in their communities. We are excited to open our first Philadelphia store in a mixed-use development, and we look forward to future expansion in the city.”

The retailer, whose limited assortment is dominated by private-brand products, has maximized refrigeration space in all of its new and remodeled stores to accommodate its recently expanded product selection, which includes a 40% increase in fresh food.

Aldi has also continued to expand e-commerce services, with grocery delivery available in more than 10,000 ZIP codes, and accelerated deployment of curbside pickup to meet shopper demand. By the end of 2020, nearly 700 stores will offer the service, among them the new downtown Philadelphia store.