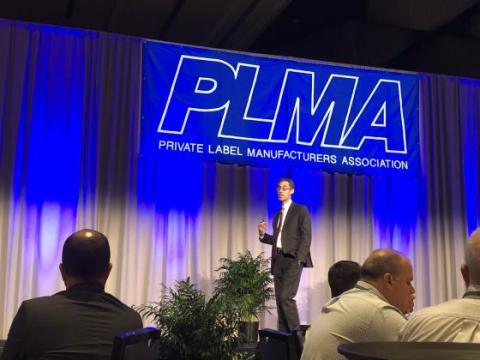 National brands and retailers' own brands are in for quite a fight, elbowing for shelf space in-store and “stream space” online. Three key areas to keep an eye on, as detailed by Wall Street analyst Ali Dibadj at the Private Label Trade Show in mid-November, include retailers becoming a major player in advertising and owning the shopper’s shopping list, private label expansion online, and how national brands are investing in digital to get their products ahead in the consumer’s search.

Dibadj, a partner with Alliance Bernstein in New York and a former adviser with McKinsey, gave a presentation titled, “How Retailers Are Building Billion Dollar Brands," at the Private Label Manufacturers Association (PLMA), annual trade show. Dibadj clearly positioned retailers in control of the fight, saying that they don’t need national consumer packaged goods (CPG) brands like they once did and are fed up with a lack of innovation coming from those partners.

Dibadj pointed to Alliance Bernstein and Nielsen research that showed stagnant sales from Procter and Gamble’s Tide entries and PepsiCo’s U.S. chips products over a five-year period, although beginning as far back as 2009, and he said the sales are somewhat due to a lack of pricing power. But he noted that retailers are looking for innovation from challenger brands and store brands, rather than the leading national partners.

Looking at an in-store category layout, he said the old version was made up of four tiers of brands with the top tier being dedicated to a top CPG brand, the leading challenger brand, and then the second-leading major brand. After that, the third-, fourth-, fifth- and sixth-ranked traditional brands would be positioned, followed by the top two private brands. In that last tier, the eighth- and ninth-ranked national brands would sit with other challenger brands.

The new layout, according to research from Bernstein Alliance, sees the same brands leading the top tier but on that second level the top-ranked private brand and the second-leading challenger brand have moved up while the fourth-, fifth- and sixth-ranked traditional brands move down. Say goodbye to any traditional brand after that and welcome in another store brand and two more additional challenger brands, Dibadj added.

He also said that all of this brand movement is adding to too much proliferation, comparing a time when Walmart carried 120,000 SKUs in-store to now managing 75 million SKUs on Walmart.com. But it’s their control of that e-commerce channel that gives retailer’s tremendous power to control the “stream space,” Dibadj added. Retailers know that shoppers typically purchase products that appear on that first page online; brands (including private brands) that fall beyond the fifth page are dead, according to a Bernstein consumer survey.

“The future of food retail is advertising,” he said, adding that the new slotting fee is top-space in the e-commerce stream. An added bonus for retailers working with brands to get onto their e-commerce sites is they collect further consumer insights from how shoppers are shopping brands and the category online.

For example, Dibadj said 20 years ago a shopper would write “Colgate” on a shopping list, which evolved into writing “toothpaste,” which could further evolve into a complete disappearance of a shopping list. Think of a shopper using a retailer’s mobile app or a smart fridge connected to a retailer app that simply reorders products automatically without a tie to a brand.

The survey also revealed that 43% of consumers feel private label products are better than the national brand. Bernstein studied a U.K. store layout and Dibadj said that branded products are seeing the majority of growth on the periphery of the store. In the center store, national brands are down 1.2% while store brands are seeing 2% gains. In some instances during the presentation, Dibadj looked at trends in the U.K. and Asia to compare to the U.S.

Where CPGs are fighting back against store brands and retailers is online, with Amazon being a key player as it drives 80% of online growth for CPG brands, he said. On its own terms, Amazon could cause trouble by pushing its own brands, following its acquisition of the Whole Foods Markets store brands. He pointed to a study the firm did that looked at private brand market share on Amazon and a category like trash bags had 0% share in 2018 but jumped to 14% last year.

The overall volume of that share is very small to the business being done offline, but it’s a notable number, as the company does have more power to give more space to its own brands, he said, going back to the importance of being a brand that registers on that first page of the search.

National brands understand this importance, and he said it’s the one area they’re fighting back the hardest. When consumers search for what they need online, they aren’t putting a brand name down into a search but rather just a product category. Brands are spending to ensure their products appear first in these searches. On Amazon, per a Bernstein study, sponsored products from bigger national companies outsell products found organically across categories on the site.

Dibadj said a digital hub is now at the center of the national brand marketing strategy, altering how national brands approach pricing of products, new product introductions, and even making private label products for retailers. In some ways, he said, national brands are acting more like challenger brands to fight back.