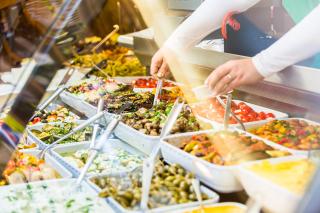 Half of the shoppers surveyed were interested in grocers offering a mobile app that would allow them to order food items for pickup ahead of arriving at the store. Insights from the survey included:

Consumers surveyed also were interested in healthier food options. More than half — 58% — said they were interested in healthy options, like vegetables. Still, 38% of consumers surveyed said they were satisfied with the nutrition offered by current food service offered at stores. FMI said grocers should consider reducing fried food offerings in favor of additional plant-based offerings and should consider advertising healthier options in stores and online.

Kroger, which plans to merge with rival Albertsons in a $24.6 billion deal, has added to its food service options at several of its stores in Texas and Ohio. The grocer partnered with the California-based Kitchen United to install new ghost kitchens inside the stores that allow shoppers to place orders from at least six restaurants, from SaladWorks to Nathan’s Famous,  via kiosks, Retail Leader previously reported.

“Retailers have a compelling story to tell about the many ways food service delivers on value, nutrition and convenience, but the analysis also suggests something’s missing: Shoppers are craving a new menu,” said Rick Stein, FMI’s vice president of fresh foods, in a release. “They want our industry to regularly evaluate cuisines and seek their feedback.”