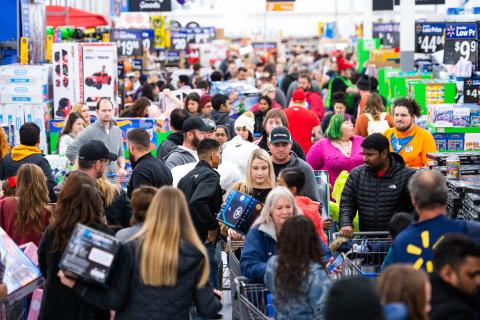 In store traffic will be impacted this holiday season as COVID-19 concerns send more shoppers online.

Shoppers will brush aside pandemic concerns and related economic challenges this holiday season to push spending to new heights, according to the latest research from the International Council of Shopping Centers (ICSC)

The group is forecasting an early start to shopping and said it expects sales to increase 1.9% to a total of $862.2 billion, with the average adult spending $655.

“Despite the difficulties the economy has faced, consumers are looking forward to the holidays and plan to spend just as much as in previous years,” said Tom McGee, president and CEO of ICSC. “We expect to see an increase in online shopping activity which means that those retailers that have implemented an aggressive omnichannel strategy will likely do well during the holiday season.”

Online only retailers are also likely to do well since e-commerce growth is forecast to increase 25% with 53% of shoppers indicating they will use click-and-collect and curbside pickup at their local retailer.

Ninety-four percent of U.S. adults will spend in-store and online at retailers with a physical store presence, and 81% expected to spend in a physical store – citing a desire to see and touch products (40%), the immediacy of brick-and-mortar purchases (38%) and better prices or sales (33%). However, 66% of respondents said they are more likely to visit stores that have strict precautions in place, like mask requirements, one-way aisles, contact barriers, occupancy limits and other similar protocols.

“Consumers have been spending less this year due to the mandates put in place related to the pandemic. As a result, they are looking to spend some of that money on holiday items,” McGee added. “Even with the additional dollars, shoppers will still be looking for the best sales and prices retailers have to offer.”

When choosing where to shop, respondents were most influenced by prices and promotions (45%) and the variety of products offered (26%) and this year 22% also said health and safety precautions have impacted their decision.

“Forecasting spending and consumer behavior is difficult this year. Legislation around additional stimulus funds as well as changing government mandates resulting from a shift in the virus could significantly alter spending in one direction or another,” McGee said.

The ICSC research didn’t touch on what percentage of shoppers plan to exclusively shop online this year or mention the impact of Prime Day or promotional response from competitors. However, ICSC anticipates the shopping season will be longer this year, with 77% of respondents expecting to start earlier than they normally would. More consumers are planning to start their shopping before Thanksgiving Weekend than in the past, with 67% saying they’ll begin before Thanksgiving Day – and 23% as soon as October. A desire to avoid potential shipping delays is also a factor with 43% of those surveyed expecting shipping and delivery delays to pose challenges throughout the holidays.

Another driver of the earlier start cited by 47% of those surveyed are deals and promotions. Overall, 80% of shoppers say deals play a role in their holiday purchases and 38% plan their shopping around specific promotional events.

Before the dates of Amazon's 2020 Prime Days were officially announced, 57% of consumers told The NPD Group they plan to do at least some, if not all, of their holiday shopping during the online event. That’s because new insights from NPD’s annual holiday purchase intentions study reveal almost as many consumers feel they will get better deals during Prime Days than on Black Friday, although the traditional start to holiday shopping still edges it out.

"The pandemic has changed retail, and the delayed timing of Amazon's Prime Days will be making its mark on the 2020 holiday season," said Marshal Cohen, NPD's chief industry advisor, retail. "Consumers are already entering this earlier-than-ever start to the holiday season with a different shopping mindset, and this is retail's chance to emphasize the notion that early is better when making holiday purchases – when it comes to inventory, shipping, and deals."

Further contributing to the impact of Prime Day on both holiday spending and retail overall, is the growing list of retailers planning their own early holiday promotions in October. According to Cohen, consumers will be watching all of the early deals, and 63% say they are very likely to compare Prime Day promotions with other retailer promotions before making a purchase. While there have been some competing promotions during July Prime Day events of the past, the Amazon promotion is now sharing the stage with broader efforts to kick start the expanded holiday season.