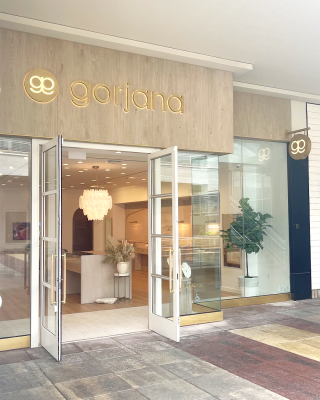 Gorjana, a jewelry retailer based in southern California, opened a second retail store in Illinois as the brand continues to expand with more physical storefronts across the U.S.

Other recently opened locations include stores in Connecticut, California, Utah and Oregon, Retail Leader reported earlier this year. The newest location opened on Sept. 9 in the Oakbrook Center in Oak Brook Illinois. The retailer opened its first Illinois store in Chicago in July 2021.

"Retail is fundamental to our brand's growth strategy, and we continue to see a phenomenal, positive response as we look to meet our customers where they live,” said Gorjana CEO Jason Griffin Reidel, in a press release. “Based on the tremendous success of our location in Chicago, we look forward to bringing the Gorjana retail experience to Oakbrook Center, providing customers with the ability to interact with our brand in person and access services like buy online, pick up in store, same-day delivery, complimentary bespoke engraving and assistance from our incredible team of stylists.”

The Laguna Beach, California-based company was founded in 2004 by Reidel and his wife, Gorjana Reidel. The couple still owns and operates the brand, and they aim to have 42 retail locations across the country by the end of this year, a company spokesperson told Retail Leader.

The founders first put the brand on the map by traveling to trade shows and selling products at small boutiques. The brand partnered with Nordstrom in 2014, and the couple opened the first Gorjana retail store in Laguna Beach in 2016.

Gorjana’s expansion was put on brief pause in 2020 due to challenges posed by the COVID-19 pandemic, but the company pushed ahead in 2021, opening seven stores last year, Reidel previously told Retail Leader’s Trend Talk.

Reidel said he wanted customers who shopped in Gorjana’s retail locations to “be able to walk in and feel like they’re kind of in our home.” The stores focus on bright and airy design, and its latest store has a “coastal bungalow feel, outfitted with design elements that incorporate the brand's coastal cool vibes,” according to the press release.

Such brands have opened physical locations as part of their efforts to acquire new customers in part due to rising costs associated with social-media advertisements and digital accusations methods. Opening physical locations also allows customers to form an emotional attachment to a brand and can help a young retailer build and cultivate its image to consumers.

DTC retailers like Warby Parker and Bonobos have helped to pave the way, opening dozens of their own retail stores, while other DTC brands like Casper Sleep have entered partnerships with physical retailers like Target, CNBC reported in 2021.