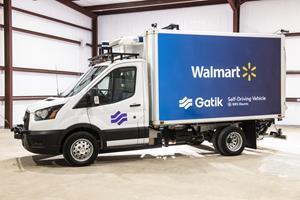 Walmart will use the new Gatik electric truck, seen here in an image from the technology provider.

Gatik, an autonomous technology company specializing in B2B short-haul logistics — and whose customers include Walmart — has launched a product that could help advance the ongoing electric-vehicle trend in the retail world.

Gatik has announced its electrification strategy with the introduction of the industry’s first Electric Autonomous Box Trucks, according to the company.

These new Electric Autonomous Box Trucks are designed with an all-electric powertrain, boast a range of 120 miles and can reach full charge in less than 1.5 hours, providing an energy-efficient autonomous solution to optimize freight movement on the middle mile.

The first of Gatik’s Electric Autonomous Box Trucks, based on existing OEM vehicle chassis, will be deployed for customers in New Orleans, via a parternship with Walmart. Late last year, Walmart said that Gatik’s multi-temperature Autonomous Box Trucks will go fully driverless on a two-mile Arkansas route, after traveling more than 70,000 operational miles in autonomous mode with a safety driver, as well as expand to neighboring Louisiana.

As for the new electric vehicles, they include VIA Motor’s advanced electric drive technology. The updated vehicle architecture offers powerful advantages to Gatik’s customers including significant emissions reductions, and savings on fuel and powertrain maintenance costs which can be passed on directly to consumers, according to the company — a statement that also reflects the increasing focus on sustainability in the wider world of retail.

Gatik is also working closely with its customers to install charging stations at distribution hubs and vehicle depots to maximize operational efficiency and economics.

“Helping our customers as they meet their ambitious emissions targets is a key pillar of our long-term strategy. Our Electric Autonomous Box Trucks are defining a new frontier in sustainability, while continuing to offer the cost reductions and shorter delivery times our autonomous solution is known for,” said Gautam Narang, CEO and co-founder of Gatik. “The B2B short-haul market is ideally suited to electric technology thanks to the route lengths involved. Trucks can charge while they’re being loaded, enabling continuous service during operational hours.”

Gatik offers customers a range of autonomous delivery vehicles between 11 and 26 feet in length, all of which are customized to deliver ambient, cold and frozen goods. The company’s product offerings ensure reliable capacity and cost-effective way to scale hub-and-spoke operations. Gatik’s electrification strategy provides retailers with the ability to automate their on-road transportation networks, while meeting their corporate sustainability and reduced emissions goals.

Gatik was founded in 2017 by veterans of the autonomous technology industry and has established offices in Palo Alto and Toronto. The company focuses on short-haul, B2B logistics for Fortune 500 retailers such as Walmart and Loblaw.