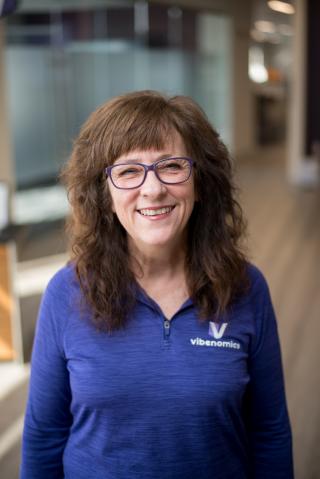 They might hear about a tantalizing deal in aisle five or find themselves singing along to a song they love. It’s all intentional to create an atmosphere that’s relaxing, but also helpful and engaging.

And there’s one woman behind it all: Libby Farr, music director for Vibenomics, an Audio Out-of-Home (AOOH) advertising and experience company. Farr--who creates the in-store audio playlists for a number of grocery retailers, including Kroger--is perhaps one of the most prolific music directors in the U.S. Her musical choices are heard by up to 200 million people monthly, and her role is both art and science.

In-store audio is nothing new, and there are a number of retail media companies that create in-store music and advertising audio for retailers of all kinds. Vibenomics, which came to be in 2016, struck a multiyear partnership with the nation’s largest supermarket retailer, Kroger, about a year ago. Vibenomics curates all the music for Kroger’s 2,300 stores and automates the audio ad buying process. For Kroger, connecting with customers and driving strategies is the ultimate goal, the company stated at the time of the partnership announcement.

When in the store, employees and shoppers take notice of what’s playing. In some cases, a killer playlist can even create fans or a following. Kroger, for example, has a number of Twitter fan accounts tracking the songs playing in their stores, with customers describing themselves humming along to the tunes while buying ice cream or tweeting about other shoppers dancing to Hey Ya by OutKast.

Farr, who has more than 40 years of radio experience, has been with Vibenomics since its beginning, using her music mastery and knowledge to create a store atmosphere ripe for buying. She spends a lot of her time checking out music, looking for inappropriate lyrics and listening for the right messaging to ensure it’s satisfactory for a shopper audience. She also watches the top music charts across genres, though she has an ear for knowing a hit before the charts reflect it.

Her curated playlists take into account the needs of the retailer and their customer base. For example, when serving a region with older folks, she might select the decades playlist--which contains music spanning the 1960’s through present day--to ensure all shoppers have something to enjoy while perusing the aisles.

The playlists are around 24 hours, though Farr never lets them end in an even hour.

“It’s an odd number so when the playlist repeats you're not going to hear the same song at the same time every day,” she explained to Retail Leader.

That consideration is mostly for employees, who might otherwise become tired of hearing the same soundtrack day in and day out, she noted. About once a month, Farr also updates the playlists to keep them fresh, for both customers and employees.

“I got from [Kroger] an idea of what they were looking for, and their response to us was, ‘We want music for an animated world,’” she said. “And I had to wrap my head around what exactly they meant. And [Kroger] meant that people are busy and out doing stuff, and they want more upbeat music instead of slow songs.”

During the COVID-19 pandemic, slow music was extremely popular, but it still wasn’t quite right for the grocery shopping experience, Farr said. For different regions of the country, Farr created a number of playlists to serve Kroger’s crowds. She leans on her expertise in knowing the value of good music, and also consulting with clients about what playlists will work best for their stores.

Good music is an important component of the in-store experience, perhaps now even more so as more shoppers return to stores amid growing confidence coming out of the COVID-19 pandemic. However, getting customers grooving to good tunes between the aisles isn’t the only goal for Kroger or other grocery retailers.

While more shoppers turned to digital platforms for the grocery needs during the pandemic, the majority still went to the store to make their purchases. Dwell time actually rose, on average, as customers increased their basket sizes in order to cut down on the number of visits they took to pick up their groceries, according to Paul Brenner, president of Audio OOH at Vibenomics. Spending more time in the store presented an even greater opportunity for audio ads.

Vibenomics’ system is advanced, with the ability to create algorithms based on foot traffic patterns and shopper dwell times. This information, which includes point-of-sale and transaction data, is sourced from the company’s third-party partner--IRI's Media Center of Excellence--and the retailer. It’s all analyzed to realize which advertisements are having an impact on sales. The programmatic advertising will run a number of ads per hour, with ads centering on adult beverages, brands or items in the store, and other products or services outside the store or industry--such as insurance ads. Vibenomics sells, creates and programs it all.

“We are the audio component of what they do with in-store retail media,” Brenner explained. “So we sell it, we program it, we do all the work, do the creative for advertisers--everything related to audio in that business.”

And the ads do work, according to Vibenomics. Incremental sales lifts from audio ads can run anywhere from 23% to 52%, Brenner said.

“It’s the fact that people are right there in the store,” he said. “It’s not a digital investment or TV investment where [advertisers are] trying to get somebody to go to the store. People are already in the store where the product can be purchased, and we’re just either [influencing] spontaneity or list-reminding or influencing the choice shoppers make. That’s a big thing.”

There’s some data to back this up, too. In-store displays impact 16% of unplanned store purchases, and it only takes three seconds to make an impact in a store, according to a study from kdm. The majority of purchase decisions are also made in-store, giving advertisers a lot of opportunity to capture buyers.

Advertisers are also increasingly looking for audio opportunities to market and sell their products--63% of media planners are relying on programmatic advertising, according to The Digital Place-Based Advertising Association (DPAA). Plus, U.S. audio ad spending rose 30% in 2019 alone to $1.2 billion, according to the Interactive Advertising Bureau (IAB). YouTube also launched its own audio ad unit to reach music and podcasts late last year, giving more credence to the media avenue.

As the shopping environment continues to shift in the aftermath of the COVID-19 pandemic, more grocers could be looking to revamp their in-store audio experiences, with people like Farr at the forefront. For retailers, it’s an opportunity to automate another area of retail media.

“For decades, [audio] has been sold as not important,” Brenner said. “It’s thought of as really boring music, not thoughtful music, and that was really holding up the value. I foresee that big groceries have all caught on Kroger is doing something right with retail media.”