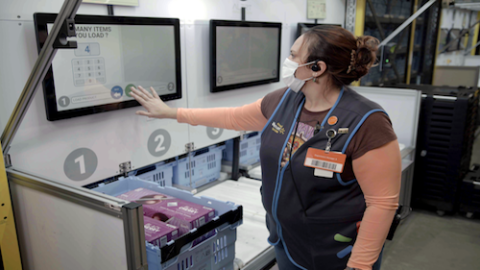 Walmart’s focus on LFCs comes as grocery and other types of merchants race to deploy new fulfillment technology and networks.

Food and other forms of retail fulfillment are getting smaller and faster — and Walmart offers fresh proof of what's coming in 2021 and beyond.

More specifically, the chain is pushing to create more local fulfillment centers in its stores as Walmart continues to battle Amazon on the logistical front.

According to a new blog post from Tom Ward, SVP of customer product, Walmart U.S., “Our customers love the speed and convenience of pickup and delivery, and we’re committed to finding faster ways to serve them, which is why we’re scaling the number of stores that will also serve as local fulfillment centers. We’re already planning dozens of locations, with many more to come.”

As Ward defines it, a local fulfillment center (LFC) “is a compact, modular warehouse built within, or added to, a store. In addition to fresh and frozen items, LFCs can store thousands of the items we know customers want most, from consumables to electronics. Instead of an associate walking the store to fulfill an order from our shelves, automated bots retrieve the items from within the fulfillment center. The items are then brought to a picking workstation, where the order can be assembled with speed.”

Walmart’s focus on LFCs come as grocery and other types of merchants race to deploy new fulfillment technology and networks — in large part a response to the spike of online shopping, a trend most recently fueled by the pandemic.

The Kroger Co., for instance, just announced that it is building a new customer fulfillment center (CFC) in Phoenix, Arizona. The food retailer is partnering with Ocado on the project, which was previously announced, though without location details. The CFC model — an automated warehouse facility with digital and robotic capabilities — will be used to serve customers across the region. Kroger says it is designing a flexible distribution network, combining disaggregated demand and the proximity of its stores and facilities that vary in design and size.

Like many other retailers, Walmart is using its stores for more commerce tasks.

“It’s clear that one of Walmart’s competitive advantages is our stores,” Ward said. “And today, stores are transforming to serve more and more purposes — we’re using them to fill pickup and delivery orders, make Walmart.com deliveries and more. We have a great operation that will serve us well for years to come, but we aren’t stopping there.”

And like Kroger and other retailers, this Walmart LFC push involves a significant level of automation — a reflection of the larger trend of robots taking over more food retail work, including for cleaning. But Walmart isn't disregarding its personal shoppers.

“We’ve always said personal shoppers are the secret to our pickup and delivery success, and that remains true," Ward said. "So, while the system retrieves the order for assembly, a personal shopper handpicks fresh items like produce, meat and seafood, and large general merchandise from the sales floor.”

After a particular order is collected, he continued, the system stores it until it’s ready for pickup. “This whole process can take just a few minutes from the time the order is placed to the time it’s ready for a customer or delivery driver to collect,” Ward said.

Such trends promise to continue in the coming months and years.

"Walmart understands that online grocery fulfillment is growing rapidly and is here to stay, which is why it’s taking advantage of its stores to make the process faster and more efficient for shoppers with local fulfillment centers," said Sylvain Perrier, president and CEO, Mercatus, which provides digital commerce and fulfillment services. "Many retailers are exploring similar concepts, such as dedicated dark store warehouses or micro-fulfillment centers, to enhance accuracy for online picking and packing, create space to take robotic to the next level and allow for additional capacity and centralized route planning. As retailers scale up their e-commerce operations, they’ll need to focus on balancing key factors like floorspace and layout, order volume and available budget to determine the most effective method for order fulfillment that’s sustainable and scalable for their unique business needs.”

Among the results so far for the Walmart LFC effort include:

“We’ll be building local fulfillment centers with various technology partners, including Alert Innovation, Dematic and Fabric,” Ward said. “With these partners, we’ll be testing different orientations and add-on innovations to understand what works best in different environments. For example, in some locations, we’ll be adding on to our stores. In others, the fulfillment centers will sit inside the existing store footprint.”

As well, Ward mentioned, in some stores, Walmart will be adding automated pickup points.

“Think of it as the ultimate convenience that allows customers and delivery drivers to drive up, scan a code, grab their order and go,” he said.