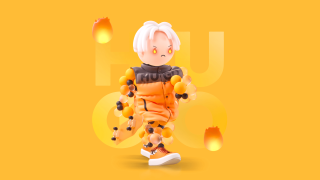 The global fashion brand Hugo is entering the metaverse, partnering with the Web3 company Imaginary Ones to launch a collection of non-fungible tokens (NFTs).

NFTs are unique digital identifiers that create a record that allows people to hold ownership of virtual items, like the 3D animated characters created as part of the Hugo X Imaginary Ones collaboration. The collection, titled “Embrace Your Emotions (EYE),” will launch in November and will include 1,001 3D animations. The goal of the NFT collection is to “encourage everyone to connect with their positive and negative emotions in an effort to promote positive mental health,” according to a release.

Five of the 1,001 NFT characters were created to represent the emotions of love, joy, sadness, fear and anger,” according to the release. An additional sixth character that combines the emotions will be auctioned off with the proceeds going to Youth Aware of Mental Health, a global program for children ages 13-17 that teaches concepts related to mental health. The donation will honor World Mental Health Day on Oct. 10, Hugo said.

Just under half of the 1,000 spots available on the allowlist (the digital directory that allows access to the NFTs) will be given to shoppers who purchase a “phygital” T-shirt. The phygital T-shirt offered by Hugo will similarly come with a QR code that unlocks a Snapchat Lens that will create an augmented reality (AR) effect, according to the release. The other 500 spots on the allowlist will be given to existing holders of the Imaginary Ones’ genesis NFT collection and through activities on Imaginary Ones’ social media accounts.

HUGO is excited to announce its collaboration with @Imaginary_Ones! The partnership marks the launch of the brand’s first NFT collection, whose first drop includes 1001 3D animations. Read more on our corporate website: https://t.co/44mlky259I#HUGOxImaginaryOnespic.twitter.com/KhNa0Y1Tbl

The launch is similar to how other luxury fashion brands have activated in the metaverse by offering exclusive products. Earlier this year, luxury fashion brand Mostly Heard Rarely Seen for example, launched a phygital 8-bit shirt collection that included a QR code to claim an NFT, Retail Leaderreported

"The metaverse is an exciting new space for fashion brands, one that is rich with potential for Hugo,” said Miah Sullivan, senior vice president of global marketing and brand communications at Hugo Boss, in a release. “We are excited to partner with Imaginary Ones to deliver an NFT collection of beautiful 3D assets that enables us not only to further explore this virtual world, but also to share a message of self-acceptance and being true to yourself, which is at the heart of what Hugo stands for."

Imaginary Ones is a Singapore-based NFT collection with 8,888 animated 3D characters on the Ethereum network, according to the release. The Ethereum network is a decentralized, open-source blockchain platform that hosts cryptocurrency and NFTs.