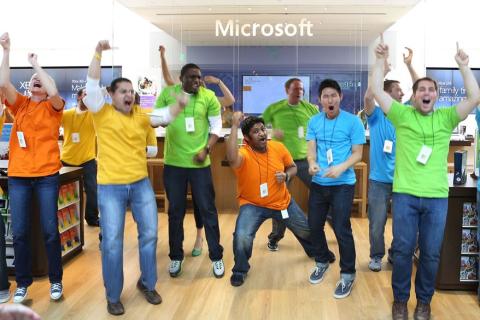 Microsoft employees celebrated at the opening of the company's stores in Boston.

An 11-year experiment with retail stores is over at Microsoft. The software company late Friday said it was permanently closing all of its retail stores as part of a strategic change in retail operations. The stores had been closed since March in response to COVID-19.

The move will result in a $450 million pre-tax charge in the quarter ending June 30 and ends Microsoft’s efforts to offer an Apple-like retail experience. Microsoft omitted from the press release how many stores it planned to close, but its web sites indicates there are currently 82 locations.

“It is a new day for how Microsoft Store team members will serve all customers,” said David Porter, Microsoft corporate vice president. “We deliberately built teams with unique backgrounds and skills that could serve customers from anywhere. The evolution of our workforce ensured we could continue to serve customers of all sizes when they needed us most, working remotely these last months.”

He also noted that sales have grown online as the product portfolio evolved to largely digital offerings and employees served customers beyond physical locations.

Microsoft’s retail efforts began in 2009 under the leadership of former COO Kevin Turner. He had joined the company in 2005 after serving as CEO of Sam’s Club and prior to that as CIO of Walmart Stores, Inc. He then recruited David Porter from DreamWorks Animation where he was leading worldwide product distribution to lead Microsoft’s efforts to build a retail operation.

Like Turner, Porter was a long time Walmart executive, having spent 25 years at the company holding key merchandising roles overseeing technology and entertainment before spending less than two years at DreamWorks. Porter joined Microsoft in February 2009 for the express purpose of building a retail operation and transforming how consumers engage with the Microsoft brand. Nine months after Porter joined Microsoft, the company opened its first retail store in Scottsdale, AZ., and Turner was on hand for the opening,

New stores quickly followed and by October 2015 when Microsoft opened a 22,000-sq.-ft. flagship location in Manhattan’s Times Square its retail footprint had grown to more than 110 locations. Turner was again on hand for the grand opening. However, Turner left Microsoft in July 2016 following Satya Nadella’s appointment as CEO in early 2014 and Microsoft began to de-emphasize its retail operations.

Going forward, the company said employees at closing stores will lead to an infusion of talent in other parts of the business.

“The Microsoft Store team has long been celebrated at Microsoft and embodies our culture,” said Microsoft chief people officer Kathleen Hogan. “The team has a proven track record of attracting, motivating, and developing diverse talent. This infusion of talent is invaluable for Microsoft and creates opportunities for thousands of people.”