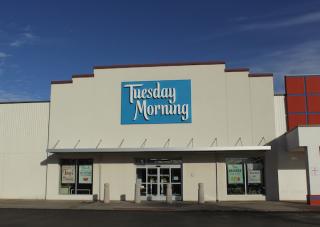 Off-price retailer Tuesday Morning has a new CEO in Fred Hand, whose appointment ends the company’s search for a new leader.

Hand, who succeeds Steven Becker, will also become a member of the board. Tuesday Morning has tapped the executive from Burlington Stores, where he most recently served as principal/COO since August 2020. It was previously announced that Becker would step down as CEO and director, though he will remain in a consultancy role until September 30 to aid in the transition.

The appointment comes as Tuesday Morning is battling tough times. The company filed for bankruptcy protection in May 2020, though it exited Chapter 11 at the start of 2021 after closing 200 stores. Tuesday Morning now operates 490 stores in 40 states.

“After a comprehensive search for a new CEO and interviews with several high-quality candidates, we are confident Fred is the ideal choice to lead Tuesday Morning's future growth,” said Sherry Smith, chairperson. “Fred is an exceptional retailer with outstanding operating, merchandising, and leadership skills, and importantly has a deep understanding of the off-price business model. His record of strong leadership at Burlington and extensive experience at other leading retailers will be instrumental in driving long-term value for Tuesday Morning."

Doukeris will take over for Carlos Brito, who is stepping down after 15 years as CEO and 32 total with the company. Doukeris has been with InBev since 1996 and currently serves as president of its North America division. He has also held leadership positions with the company’s Brazil, China and U.S. divisions – three of its biggest markets. InBev aims to announce a replacement for Doukeris’s current role by July 1.

“Throughout my career at AB InBev, I have had the privilege to lead our business in different regions of the world and to work alongside the industry’s most talented and passionate colleagues every step of the way,” said Doukeris. “I look forward to bringing a fresh perspective that builds on our consumer-first mindset and drives innovation and transformation in this next exciting stage.”

Eboli comes to Conagra from The Unilever Group, where he served as head of supply chain, North America. He succeeds Dave Biegger, who is retiring.

“Ale is an exceptional leader who brings a proven track record of success in strengthening supply chain operations," Sean Connolly, Conagra president and CEO, said in a statement. "We are excited to welcome him to Conagra, and I look forward to working together to ensure we deliver exceptional value for all of our stakeholders."

Lucot’s experience encompasses 42 years with Giant Eagle, one of the nation’s leading food retailers and distributors, where he served as president and chief operating officer before his 2016 retirement. He was appointed as chairman of the board of Topco Holdings in 2016 and is also a member of the Food Marketing Institute board of directors.

Toronto-based Mercatus has a network of more than 50 integration partners and helps grocers connect with partners of choice for e-commerce solutions. The company adds Lucot as an advisor at a time of rapid change in consumer behavior toward e-commerce.

“At a time of such rapid channel growth, having someone like John – a proven leader in the grocery industry with years of retail business acumen – will be extremely valuable to Mercatus and our clients,” said Sylvain Perrier, president and CEO. “From his long, successful career at Giant Eagle, to his impact as a board member at a number of industry organizations, John is engaging, knowledgeable and insightful. I’m looking forward to working closely with him, as is my executive team, as we address the most relevant digital commerce needs of grocery retailers quickly and clearly.”