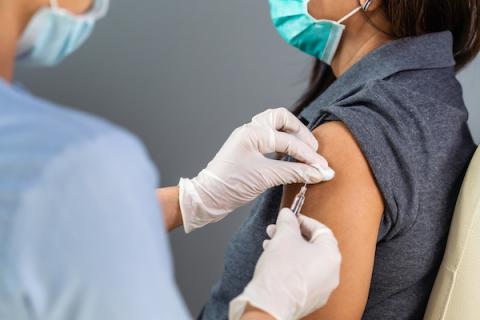 The requirements, which impact roughly 100 million workers, mandates that companies with more than 100 employees ensure their workers are vaccinated against COVID-19 by Jan. 4, 2022, or that they test negative weekly. The rule is issued by the Occupational Safety and Health Administration (OSHA). Employers are not required to pay for the testing, though they do have to give employees paid time off to get vaccinated. In addition, non-vaccinated workers must also wear face coverings while on the job.

The second rule, issued by the Centers for Medicare and Medicaid Services (CMS), requires all healthcare workers to get vaccinated by Jan. 4, without an option for weekly testing instead.

“Since the president’s announcement of the vaccine mandate for private industry, the seven-day average number of cases in the United States has plummeted by more than half,” per NRF’s statement. “Nevertheless, the Biden administration has chosen to declare an ‘emergency’ and impose burdensome new requirements on retailers during the crucial holiday shopping season.”

The association also noted the rule could exacerbate the ongoing labor shortage as retailers scramble to fill open roles.

“It is critical that the rule not cause unnecessary disruption to the economy, exacerbate the preexisting workforce shortage or saddle retailers, who are already taking considerable steps to keep their employees and customers safe, with needless additional requirements and regulatory burdens,” NRF stated.

NRF also launched an advertising campaign calling on Congress and President Biden to pass the Infrastructure Investment and Jobs Act, a bill that would provide more than $550 billion over the next five years for reform of core infrastructure including roads, bridges, ports and broadband critical to U.S. infrastructure. The bill would make significant investments to relieve the ongoing supply chain crisis. The retail industry is one of the most dependent industries on quality infrastructure, from imports to the transportation of goods and the ability of consumers to get to retail locations.

“Retailers depend on a safe, reliable and efficient transportation system to move billions of dollars’ worth of merchandise every day,” NRF President and CEO Matthew Shay said. “The ongoing supply chain disruptions that retailers and others are facing highlight the need for investment in a truly 21st century infrastructure system.”

The bill was passed by the U.S. Senate in August, but members of Congress continue to argue about a second spending bill that will address many of the “soft” infrastructure investments Biden hopes to see, such as child care, paid family leave and more.

See the ad from NRF below.