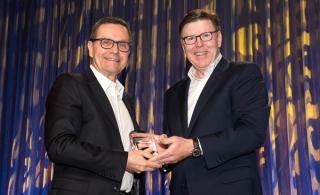 Mariano and Powell were recognized for their industry leadership and contributions at the GMA’s annual Executive Forum held at The Greenbrier in White Sulfur Springs, WV. The Hall of Achievement Award, which is GMA’s highest honor, recognizes the service and extraordinary contributions of distinguished food, beverage and consumer packaged goods industry leaders.

“Ken Powell’s leadership at General Mills has been marked by listening to consumers, driving innovation and committing to a sustainable future for the world around us. He brought that same steadiness and sensible leadership to his role as chairman of the GMA Board of Directors,” said Pamela G. Bailey, GMA’s President and CEO. “Bob Mariano’s 50-year career in the grocery industry earned him a reputation as the consummate merchant, someone with an uncanny ability to listen to and understand his shoppers.

In addition to the Hall of Achievment awards, GMA presented Hormel and Nando’s PERi-PERi with CPG Awards for Innovation and Creativity. The companies were selected by the GMA Advisory Council in recognition of their creativity and willingness to take risks, resulting in measurable results and significant impact on the industry.

“GMA member companies are continuously seeking better ways to connect with consumers and meet evolving consumer desires. The successes of Hormel and Nando’s PERi-PERi exemplify the innovation and creativity seen throughout our industry,” Bailey said.

Hormel Foods was recognized for its Skippy P.B. Bites, which were created to take peanut butter out of the jar. The new product was the first in its category of peanut butter snacks, initially launched in 2015 in two varieties – pretzel and double peanut butter – that exceeded expected sales.

Nando’s PERi-PERi won for its launch in Atlanta of the grocery option for its famous sauce, a Southern African blend of chilies, garlic, sun-ripened lemon, fresh herbs, and spices. People use Nando’s PERi-PERi sauce in its restaurants in 26 markets across the world – including Chicago and Washington D.C. in the U.S. – but the company wanted to launch its bottled sauce to consumers in cities where it did not have restaurants. It chose Atlanta for a test market, and used a combination of targeted sampling, strategic seeding, influencer gifting, and a series of pop‐up experiences to gain widespread social media sharing and earned media coverage that was supplemented by a trade marketing program.