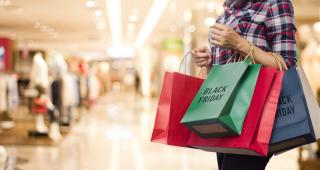 Nearly 200 million consumers shopped during Thanksgiving weekend, the five-day period that begins Thanksgiving Day and lasts through Cyber Monday, according to the National Retail Federation (NRF).

More consumers shopped online than in physical stores with 122.7 million people shopping at brick-and-mortar stores during the weekend and  130.2 million people shopping online. Brick-and-mortar saw the largest increase over last year, increasing 17% from 2021, according to the NRF survey. Online shopping increased by 2%. As Retail Leader previously reported, online Black Friday sales this year topped $9.12 billion, which is the largest amount ever spent online during the nation’s busiest shopping day. The numbers are promising for retailers and show consumer resilience in the face of economic pressures like rising interest rates and inflation.

“The Thanksgiving holiday shopping weekend is a tradition treasured by many American families,” said Matthew Shay, NRF President and CEO, in the release. “As inflationary pressures persist, consumers have responded by stretching their dollars in any way possible. Retailers have responded accordingly, offering shoppers a season of buying convenience, matching sales and promotions across online and in-store channels to accommodate their customers at each interaction.”

The most popular shopping destinations during the shopping holiday were online stores and department stores, which 42% of shoppers said they visited. Forty percent of shoppers went to grocery stores or supermarkets, 36% shopped at clothing and accessories stores and 32% of consumers shopped at discount stores, the NRF said.

On average, consumers spent $325.44 on holiday shopping purchases from Friday through Monday, an increase of about $24 from last year. About $230 of the money spent was allocated toward holiday gifts, according to the NRF survey. While Thanksgiving weekend saw a record number of holiday shoppers, major retailers like Target and Walmart started holiday shopping sales earlier this year as they aimed to lure customers and clear out inventory.