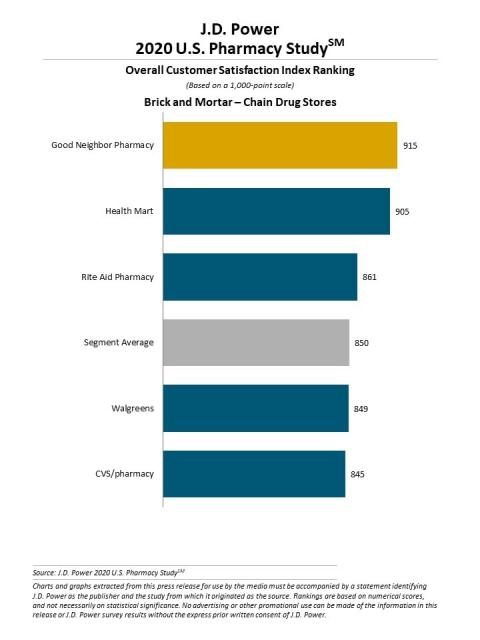 Beyond the rankings of J.D. Power's annual "U.S. Pharmacy Study," the provider of consumer insights, advisory services, and data and analytics found that major pharmacy chains’ expansion into primary care was leading to considerable increases in both customer satisfaction and spending.

“When you look at the major pharmacy business trends of the past couple of years — CVS acquiring Aetna, Walgreens partnering with Humana, and Walmart moving into health insurance — it’s clear that pharmacy operators are positioning themselves to become hubs of consumer health care, edging into the space once reserved for primary care physicians’ offices,” noted James Beem, managing director of health care intelligence at Troy, Michigan-based J.D. Power. “What has not been clear until now is exactly how consumers would react to the shift. Simply put, they’re embracing it, and it’s driving higher overall satisfaction and increased spending as they use more health-and-wellness-oriented services.”

Key findings of the study include:

As for the study's rankings, they offered few surprises. Wegmans Food Markets ranked highest among brick-and-mortar supermarket pharmacies for a third straight year, with a score of 904. Publix Super Markets (889) was second and Southeastern Grocers banner Winn-Dixie came in third (883).

Among brick-and-mortar mass merchandiser pharmacies, the Sam’s Club came in first for the fifth year in a row, earning a score of 885. Costco and CVS/pharmacy inside Target (870 each) tied for second place.

Good Neighbor Pharmacy was first among brick-and-mortar chain drug store pharmacies for a fourth consecutive year, with a score of 915, while Health Mart (905) ranked second and Rite Aid Pharmacy came in third (861).

The study, now in its 12th year, measures customer satisfaction with brick-and-mortar and mail-order pharmacies. This year’s rankings were based on responses from 13,378 pharmacy customers who filled a prescription during the three months before the survey period of September 2019-May 2020.

In related news, Publix recently received the Specialty Pharmacy Patient Choice Award, from Livingston, New Jersey-based Zitter Insights, a division of Managed Markets Insights & Technology (MMIT). The award was the Retail Pharmacy category, and marked the first time that the grocer has earned this particular honor.