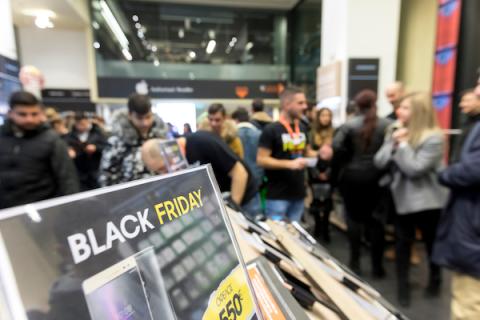 The projections come as retailers have pushed holiday sales earlier in the season and consumers have reported shopping earlier due to fears of items running out of stock. NRF updated its retail sales guidance for 2021, projecting sales for the year will reach between $4.44 trillion and $4.56 trillion.

“We’re expecting another record-breaking holiday season this year and Thanksgiving weekend will play a major role as it always has,” said Matthew Shay, NRF president and CEO. “Nonetheless, consumers are starting earlier than ever to be sure they can get what they want, when they want it, at a price they want to pay. Black Friday stopped being a one-day event years ago, and this year some consumers started shopping for Christmas as early as Halloween. NRF is encouraging consumers to shop [safely] and shop early, but retailers are confident they have enough inventory on hand to meet holiday demand.”

Two-thirds (66%) of shoppers surveyed said they plan to shop over Thanksgiving weekend this year. Extrapolated out, that amounts to an estimated 158.3 million people––an increase from 156.6 million last year. However, that’s still below the pre-pandemic level of 165.3 million people in 2019.

Of those planning to shop on Thanksgiving Day, 65% plan to do so in person, up 50% from last. Year. Another 64% said they plan to shop in-store on Black Friday, up 51% from 2020 when consumers were less confident to visit stores due to the COVID-19 pandemic.

Deals are the top reason most shoppers (58%) are returning to stores, but tradition is also a strong lure for many (28%), the survey found. Slightly more shoppers––61%––said they had already begun their holiday shopping compared to last year (59%). By comparison, just 51% of shoppers said the same in 2011.

“Shopping early is a trend we’ve seen for years and it began long before the pandemic,” Phil Rist, executive vice president of strategy at Prosper, said of the survey results. “While some consumers like the thrill of last-minute shopping and others just procrastinate, many prefer the comfort of having the shopping done early so they can relax and enjoy the season.”