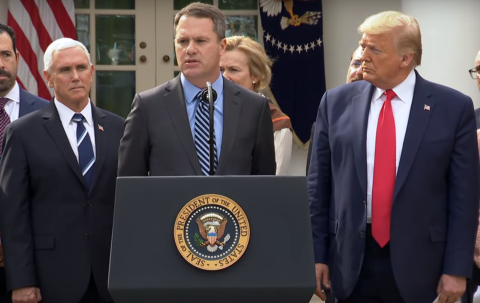 Walmart president and CEO Doug McMillon (center) was among the leading retailers and health care companies pledging support for President Trump's declaration of the cornavirus outbreak as a national emergency.

It was a remarkable scene at the White House the afternoon of March 13, as President Trump declared the coronavirus outbreak a national emergency and enlisted some of the biggest names in retail and healthcare in the battle.

“To unleash the full power of the federal government in this effort, today I am officially declaring a national emergency.  Two very big words,” Trump said. “We’ll remove or eliminate every obstacle necessary to deliver our people the care that they need and that they’re entitled to.  No resource will be spared.  Nothing whatsoever.”

While many of the initiatives he described involve hospitals, he also detailed plans involving pharmacies and retailers to make drive-thru tests available in the critical locations identified by public health professionals.

“The goal is for individuals to be able to drive up and be swabbed without having to leave your car,” Trump said.

In a show of the collective strength of the retail industry to collaborate with one another in times of national need, President Trump gave each of the key executives an opportunity to make brief comments.

“When we got the call yesterday from the White House, we were eager to do our part to help serve the country. And given what we’re facing, that’s certainly important to do. We should all be doing that,” said Walmart president and CEO Doug McMillon. “We’ve been asked to make portions of our parking lot available in select locations in the beginning, and scaling over time as supply increases, so that people can experience the drive-thru experience that the President described. We’ll stay involved and do everything we can from a supply-chain point of view to be of assistance.”

Joining McMillon at the event was Richard Ashworth, who was named president of Walgreens in early February by parent company Walgreens Boots Alliance.

“Similar to Doug and Walmart, we’re happy to stand in here and help in communities all across America. Because a lot of times, when we have natural disasters, our stores are a beacon in the community, and this situation is no different,” Ashworth said. “So we look forward to partnering with the CDC, the administration, HHS, and the task force, and specifically to the Vice President, who’s doing such a fantastic job.  We’re ready to engage and help.”

Target chairman and CEO Brian Cornell noted that although Target competes with Walmart and Walgreens, the companies are focused on a common competitor in defeating the spread of the coronavirus.

“We look forward to working with the administration to do our fair share to alleviate this growing threat. So, thank you for including us today,” Cornell said. “In the near term, we’re all committed to making sure we’re keeping our stores open to serve the American consumer who is rapidly stocking up on household essentials, key food and beverage items that they need during this time; making sure we run safe stores; and creating an environment that’s safe for our team members, making sure that they feel supported during this very critical time.”

Those sentiments were echoed by CVS Health chief policy and external affairs officer and general counsel, Thomas Moriarty, who also was given the opportunity to make brief comments.

“We have been focused, since the start, of making sure our patients and the customers we serve have the information they need and the safety they need as well,” Moriarty said. “We are committed to working with the administration and local public health officials to make this work as well.  And thank you, sir, for the honor.”

During the one hour and 12 minute event that began at 3:30 p.m. on Friday, March 13, the assembled members of the global media had only one question for the retailers in attendance. It related to the availability of hand sanitizer, which President Trump asked Walmart CEO McMillon to answer.

“Specifically the areas where we’re seeing pressure in the supply chain are surface cleaners, cleaning supplies, paper goods, in particular,” McMillon said. “Hand sanitizer is going to be very difficult to have 100% in stock on for some time. We’re still replenishing it and shipping it, but as soon as it hits the stores, it’s going. The same thing is true for the categories I just mentioned. So all of the retailers will be working hand-in-hand with the suppliers to bring that to the market as fast as we can.”

When asked for his advice to Americans who are seeking the products he mentioned in stores and online, McMillon said, “I think this team has given you other examples of what people can do to fight back against this virus, and you should look at the entire list.”

At that point, Dr. Stephen Fauci, director of the National Institute of Allergy and Infectious Diseases (NIAID), reiterated the most basic of advice.

“Wash your hands as often as you possibly can. If you don’t have the alcohol wipes, try and get them,” Fauci said.

Also chiming in on the issue was Alex Azar, secretary of Health and Human Services.

“You want to wash your hands. You want to keep keep distance from people, and if you’re around someone sick, keep away from them. Just basic, basic public health,” Azar said.

Then, in a nod to the peculiar behavior of consumers stocking up on toilet paper, Azar turned to Fauci and asked, “do you need to give some guidance that toilet paper is not an effective protection against getting the coronavirus?”