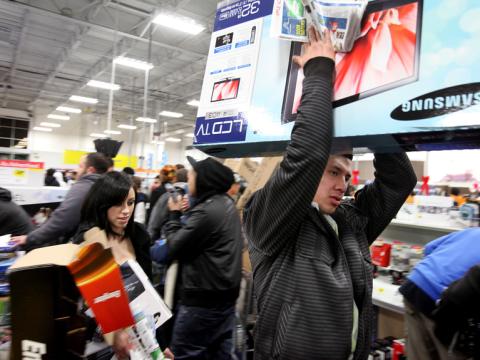 The finding, which stems from a December survey conducted by ResumeBuilder, reveals that the ongoing labor shortage is majorly impacting retailers at the busiest time of the year. More than three-quarters of retailers also said they had difficulty hiring seasonal staff.

The survey, conducted Dec. 10-11, queried 1,250 retail store owners and managers, who detailed how difficult it was to hire temporary staff amid a tight labor market. In addition, the survey revealed how retailers are responding to the labor crunch with incentives to hire reluctant workers.

A lack of qualified candidates was one of the biggest challenges for retailers (44%), as well as temporary workers who quit after a few days (44%). Another 40% said they weren’t getting enough applications for open roles and 41% said no-shows who had interviews scheduled were another top problem.

Retailers who have snagged new employees for seasonal work have faced challenges retaining their workforce, as 38% of retailers said they hired employees who did not show up for shifts. Retail workers have been part of The Great Resignation, according to Stacie Haller, a career counselor.

“There is a pervasive energy out in the workplace that is resonating with all workers, that there is something better out there for them,” Haller said in the survey. “With the abundance of job opportunities available, and the messaging from the media that now is the time to get the job you want, job-seekers feel empowered to do as they please during the hiring process. Seasonal employees may continue to look for permanent positions and will leave when they find them, even if it’s only a few days after starting a new position.”

“Seasonal work has traditionally been for workers looking to make extra money during the holidays,” Haller said. “Since remote work has taken hold, many people are exploring other routes for extra income. With the same retail and hospitality skills, workers can find other jobs where they have more flexibility, can earn more money, and don’t have to worry about COVID exposure.”

The hiring challenges have led retailers to increase pay––49% said they've raised their wages. This was the most popular incentive to find new workers, followed by signing bonuses (44%), employee discounts (40%), health insurance (38%), permanent job offers (36%) and paid time off (34%).

The vacancies are also forcing retailers to pay overtime for the workers they do have. More than half of retailers (52%) have asked their staff to work overtime, while 41% are giving non-retail employees retail responsibilities to help fill the gaps. And unfortunately, the lack of staff is impacting operations, as 48% of short-staffed retailers are experiencing delays in fulfilling orders and 47% are unable to offer extended hours during the holiday shopping season. Another 39% said the quality of their customer service has declined as a result.