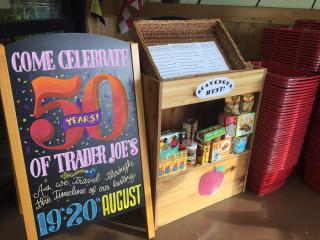 Trader Joe's is marking its 50th anniversary with in-store celebrations designed to appeal to its legions of fans.

Festivities include: special product tastings, giveaways, and more.  A limited-edition 50th Anniversary reusable bag will also be offered to customers for only 50 cents.  Trader Joe's introduced its first reusable bag to customers 40 years ago.

The first Trader Joe's store opened on Aug. 25, 1967, in Pasadena, Calif., on Arroyo Parkway, and still remains in operation today. Trader Joe's has since grown to 467 stores in 41 states and Washington, D.C.

For years consumers turned their noses up at private label products. Trader Joe’s has been credited with making private label cool.

As Business Insider's Kate Taylor reported in May, 80% of the products carried by Trader Joe's are in-house brands. The grocer buys those goods directly from suppliers, which cuts out the middlemen in the supply chain and ensures the retailer can keep prices low.