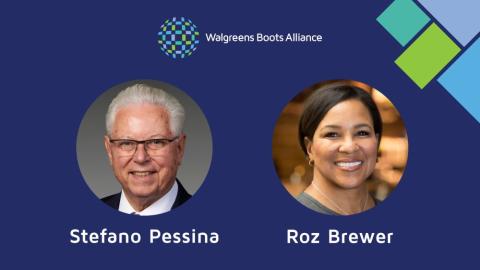 Walgreens Boots Alliance has appointed Roz Brewer CEO and Stefano Pessina executive chairman of the board.

Another female CEO has been appointed to a major health care company as Walgreens Boots Alliance Inc. (WBA) appoints Rosalind "Roz" Brewer to the leadership position, effective March 15. Brewer will join the WBA board of directors upon assuming the role. She succeeds Stefano Pessina, who, as previously reported, will transition to the role of executive chairman of WBA's board.

“The board conducted an extensive search to identify an exceptional leader who will build on WBA’s track record of success and take advantage of the many growth opportunities in many markets across the company. We are excited to have found that person in Roz,” said Pessina. “She is a distinguished and experienced executive who has led organizations globally through periods of changing consumer behavior by applying innovation that elevates customer experiences — ultimately driving significant and sustainable growth and value creation. Her relentless focus on the customer, talent development, operational rigor, and strong expertise in digital and technological transformation are exactly what WBA needs as the company enters its next chapter.”

The appointment of Brewer to the top job at Walgreens means that the nation's two largest chain drug store and health care companies will soon be led by women.CVS Health’s transformation from a drug store chain to a vertically integrated health care provider took a major turn with Karen Lynch set to replace Larry Merlo as CEO on Feb. 1.Lynch is currently EVP of CVS Health and president of Aetna, the major insurance company that CVS Health acquired two years ago, and her appointment as president and CEO at CVS Health will make it the largest U.S. company to be led by a female CEO.

Meanwhile, Brewer, currently ranked No. 27 on Fortune’s 50 Most Powerful Women in Business, will bring to WBA a proven track record of leadership and operational expertise at multinational corporations, with deep experience in strategic development, marketing, digital transformation and loyalty, innovation and technology, supply chain, and store development.

“WBA is a world-class and trusted organization whose purpose I deeply admire,” said Brewer. “The health care industry is constantly evolving, and I am excited to work alongside the entire WBA team as we deliver further innovation and positively impact the lives of millions of people around the world every day. This is especially true today as the company plays a crucial role in combating the COVID-19 pandemic. I step into this role with great optimism for the future of WBA; a shared responsibility to serve our customers, patients and communities; and a commitment to drive long-term sustainable value for shareholders.”

Brewer was most recently COO, group president and member of the board of directors of Seattle-based Starbucks Corp., where she was instrumental in helping the company accelerate its growth strategy, expand its global reach and drive value for all of Starbucks’ diverse stakeholders.

Before her time at Starbucks, Brewer worked at Sam’s Club from 2012 to 2017. She made history by becoming the first woman and first African-American to lead a Walmart Inc. division. While there, she successfully grew membership, transformed merchandise and amplified the use of digital technology to enable a seamless shopping experience at scale, which led to sequentially improved comp sales.

Brewer earned a bachelor’s degree in chemistry from Spelman College and attended Wharton’s Advanced Management Program and Stanford University’s Directors’ College. She is a former director of Amazon, Lockheed Martin and Molson Coors Brewing Co. Brewer also chairs the board of trustees at Spelman College.

During his six-year run as CEO following the merger between Walgreens and Alliance Boots in December 2014, Pessina transformed and modernized the company into a global pharmacy, health and wellness leader, significantly expanding WBA’s retail footprint and investing in digitalization. Pessina will replace James Skinner as executive chairman of WBA in March 2021. Skinner will remain on the board as a nonexecutive director to facilitate a smooth leadership transition.

“Our global position as an accessible health care provider in the communities we serve has never been so critical, and I am very confident in the company’s prospects for growth under Roz’s leadership,” said Skinner. “It has been an enormous privilege for me to chair the board through such an extraordinary time for our company, and to work alongside Stefano, with his keen eye for anticipating shifts in the rapidly evolving health care market and staying one step ahead of consumers’ needs. He was a driving force behind the merger of Walgreens and Alliance Boots, creating the first global pharmacy-led, health and wellbeing enterprise, and has positioned WBA extremely well for continued growth and expansion. He is transitioning leadership into very capable hands. I am excited to have the opportunity to continue to serve as a board member going forward to what I believe will be a period of continued growth and prosperity for our company.”

Bentonville, Ark.-based Walmart operates more than 11,300 stores under 56 banners in 27 countries, and e-commerce websites, employing 2.2 million-plus associates worldwide. Walmart U.S. is No. 1 on The PG 100, Progressive Grocer's list of the top food and consumables retailers in North America, while Walmart-owned Sam's Club ranks No. 9 on the list.

CVS Pharmacy, the retail division of Woonsocket, Rhode Island-based CVS Health, with nearly 10,000 locations, including more than 1,700 pharmacies inside Target and Schnucks grocery stores, is No. 6 on The PG 100.