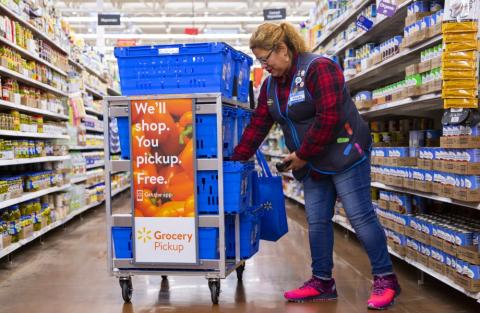 Ongoing strength of Walmart’s grocery business and a 37% e-commerce growth rate helped the retailer grow U.S. same store sales 1.9% in the fourth quarter, a figure that was less than analysts forecast.

Total sales at Walmart’s U.S. stores division increased 1.9% to $92.3 billion and the division’s full year sales increased 2.8% to $341 billion, the company announced Feb. 18, ahead of an investor conference in New York.

“Food and consumables sales trends were strong despite a headwind from lapping last year's SNAP benefit. Grocery sales on a two-year stacked basis were among the best in the past 10 years,” according to presentation materials Walmart provided ahead of the conference. “Increased value, including higher penetration of private brands, along with our expanded omnichannel offering contributed to strength. Price investments led to modest food deflation while consumables' inflation increased modestly versus last year.”

“The fourth quarter started and ended strong with solid sales growth through Cyber Monday and in January,” said Walmart CFO Brett Biggs. “In the few weeks before Christmas, we experienced some softness in a few general merchandise categories in our U.S. stores. However, Walmart U.S. grocery sales and e-commerce sales were strong throughout the quarter.”

Sam’s Club performed well, including solid results in e-commerce, according to Biggs, while Walmart experienced softness in some key international markets such as Chile where unrest led to disruption in the majority of stores.

“The holiday season delivered positive transaction growth and underlying expense leverage was strong for the quarter. However, it wasn’t as good as expected due to lower sales volume and some pressure related to associate scheduling,” Biggs added.

Despite reporting fourth quarter earnings per share that were below analysts’ estimates, Biggs maintains Walmart is confident in its business strategy and ability to, “deliver value and convenience for our customers through an integrated omnichannel offering across the globe.”

The company also plans to spend about $11 billion on capital expenditures with those dollars going toward store remodels, customer initiatives, e-commerce, technology and supply chain. New store expansion has not been a priority for Walmart for several years now, especially in the U.S., where total selling space has been maintained around seven million square feet.