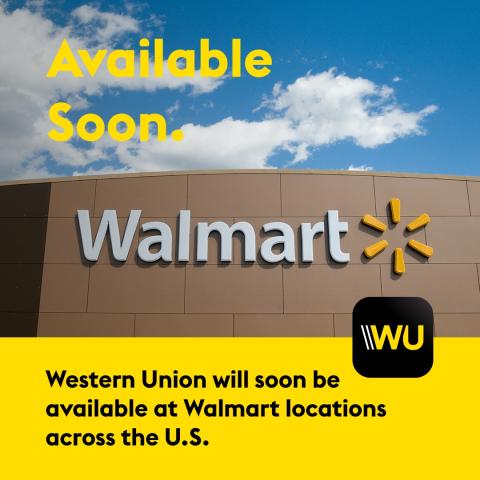 According to a company spokeswoman, "Walmart will become the first major retailer in the United States to provide international and domestic money transfers through multiple money transfer principals, including Western Union, Ria and MoneyGram."

Walmart and Western Union have come to an agreement that will, for the first time, permit Western Union money transfer services at Walmart locations across the United States. Among the services to be offered at more than 4,700 Walmart stores, with a rollout planned to start this spring, are domestic and international money transfers, bill payments and money orders.

Using Western Union’s global cross-border, cross-currency platform encompassing 200 countries and territories, Walmart customers will be able to send money to family and friends almost anywhere across the world. Customers will be able to choose having their money transfer being paid out in minutes at 550,000-plus retail locations or into billions of bank accounts, wallets or cards.

“Walmart is much more than a place where customers shop,” said Wilbert Noronha, VP of financial services at the retailer. “To millions, it’s also a place they trust for their financial needs as well. We’re thrilled to soon begin offering Western Union money transfer services at Walmart locations nationwide and, together, continue connecting family and friends worldwide through Western Union’s global money movement platform.”

“Together with Walmart, we have a shared purpose of supporting our customers who rely on us to send money to make everyday purchases including essentials like health care and groceries,” noted Jean Claude Farah, president, global network at Denver-based Western Union. “In an age when speed, security, convenience and trust mean everything, we are offering customers greater ease, reliability, access and confidence with every transaction.”

Walmart currently enables customers to transfer money domestically using MoneyGram or Walmart2Walmart Powered by Ria, outside the United States with MoneyGram, Walmart2World Powered by MoneyGram and Walmart2World Powered by Ria, or via the company’s app. A Walmart spokeswoman told Progressive Grocer: “The addition of Western Union will be additive to our current marketplace model, providing customers more choice than ever before. When Western Union money services become available at Walmart stores in the spring of 2021, Walmart will become the first major retailer in the United States to provide international and domestic money transfers through multiple money transfer principals, including Western Union, Ria and MoneyGram.”

Since 2014, Walmart has saved customers more than $1.5 billion through its marketplace financial services offerings, according to the retailer. Most recently, the company revealed that it’s setting up a fintech startup designed to develop and offer modern, innovative and affordable financial solutions in a strategic partnership with Palo Alto, California-based fintech investment firm Ribbit Capital. The venture will bring together Walmart’s retail knowledge and scale with Ribbit’s fintech expertise to deliver tech-driven financial experiences for Walmart’s customers and associates.