WatchBox, a platform for buying, selling, and trading pre-owned luxury watches, recently unveiled renderings for its New York Collector's Lounge and presented the roadmap for its next phase of expansion inLondon and Shanghai.

Entering its fifth year in business, WatchBox is continuing to grow its international footprint, launching in Zurich, Switzerland, and Riyadh, Saudi Arabia, in its first quarter of 2022. The company also plans to launch in London and Shanghai within the next six months.

"WatchBox's expansion strategy targets regions with a strong growth forecast for the luxury watch segment," said Justin Reis, global CEO and co-founder of WatchBox, in a news release. "We're excited to expand our physical footprint in the United Kingdom and China, two of the top five global watch markets, where we will introduce our curated inventory and client advisory model. Both London and Shanghai have strong local watch cultures, and as leading destinations for international business, we aspire to be the home away from home for watch collectors around the world." 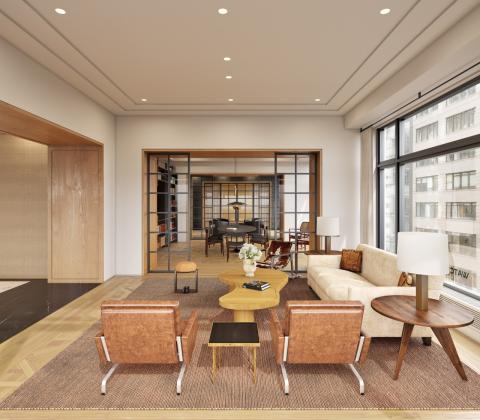 Since its founding in 2017, WatchBox has developed a presence in the U.S., Hong Kong, Singapore, Switzerland as well as the Middle East, where a joint venture with Rolex jeweler Ahmed Seddiqi & Sons established the company in Dubai and Riyadh. The next phase of growth will bring the Collector's Lounge concept to key U.S. markets, according to the release.

WatchBox’s lounge experience was conceptualized with design firm Studio Mellone. New York-based Brazilian interior designer Andre Mellone has earned a reputation for creating spaces that are “contemporary, chic and inviting,” according to the release. Mellone's concept for WatchBox will come to life in New York, Miami, Los Angeles and Boca Raton. The New York Collector's Lounge will be a flagship for the company, scheduled to open in the third quarter of 2022.

"Old concepts of retail, residential and hospitality are all merging into one. Stores look like homes; homes look like hotels…it's all about warmth and excitement and appreciation for design," Mellone said in the release. "Spaces should be impactful and exciting, but feel comfortable, and have a staying power."

On his inspiration for the WatchBox spaces, Mellone added, "I've always been a fan of the design aspects of early James Bond films. There's a cool, un-self-conscious, playful sexiness to them that I felt would perfectly match the concept for WatchBox."

Mellone's plan will span a 5,000-square-foot space on the fourth floor of the landmark Fuller Building in Midtown, Manhattan. The lounge will merge event space with private showrooms, a boardroom, video and digital media studios, and a hands-on "watch lab," where visitors can examine, learn and work with WatchBox's dedicated advisory team as they explore the company's curated watch collections. Events and programming will coincide with the opening later this year.

Locations in Miami's Design District, The Boca Raton resort and an expansive lounge, showroom and event space in West Hollywood, California, will open later this year.