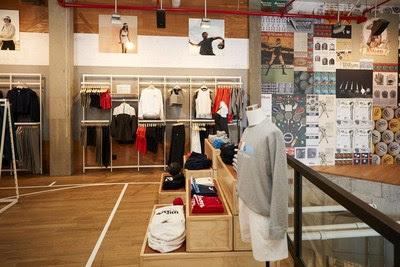 Wilson Sporting Goods has unveiled its second physical store in New York City and its third store to date. The new location is a neighborhood store located on the Upper East Side of Manhattan.

Spanning more than 8,000-square-feet, the two-story location features a multi-use court on the lower level where visitors can test out the brand's latest equipment, apparel and accessories.

The store includes Wilson's first "Equipment Room," where shoppers can leverage a rental program for sporting goods needs across sports, including baseball, softball, tennis, pickleball, basketball, football and volleyball. Rental fees range from $5-$10 per day based on product, and all fees will be taken off the final price if purchased.

The store also offers a curated assortment of Wilson's equipment across a variety of sport categories, including the official basketballs of the NBA and WNBA, the Duke (the official ball of the NFL), gloves, tennis rackets like the Pro Staff and Clash, and D9 golf irons. The store will also house Wilson's athletic-lifestyle sportswear collection, available for both men and women.

"New York continues to be a priority market for Wilson as we expand our retail footprint," said Gordon Devin, president and general manager, Wilson brand, in a news release. "From permanent retail locations to pop-ups, we will celebrate athletes of all levels and offer them the best of Wilson, ranging from premium products to curated experiences."

To further expand its New York presence, Wilson will be opening a third store in the Big Apple, in the Columbus Circle neighborhood in June, as well as pop-up shops in key locations throughout the summer, according to the release. Additionally, Wilson will debut its annual pop-up at the U.S. Open, where Wilson has been the official ball and racket stringer for over 40 years.

Wilson opened its first brick-and-mortar store in July 2021 in the same city (Chicago) that the sporting goods giant was born and is still headquartered.